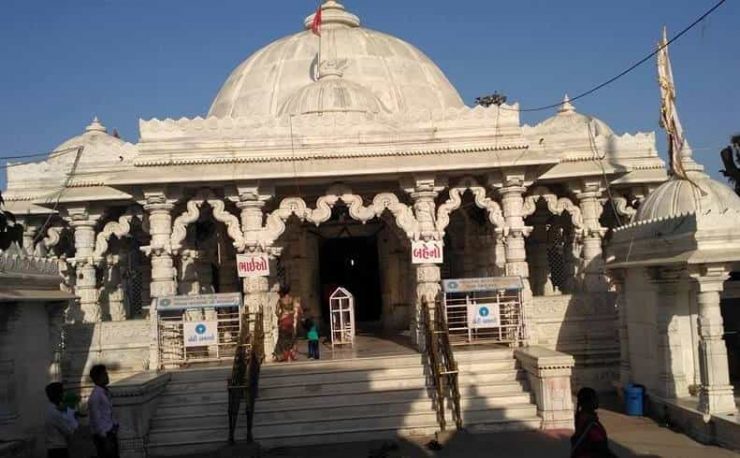 Bahuchara Mata is a Hindu goddess. She was a daughter of a Charan by the name of BapaldanDetha. She and her sisters were on a journey with a caravan, when a marauder named Bapiya attacked their caravan. It was common practice among charan men and women, if overpowered by their enemies, not to surrender but to kill themselves. Shedding the blood of charan was considered a heinous sin. When Bapiya attacked the caravan, Bahuchara and her sisters announced tragu (self-immolation) and cut their breasts. Legend tells that Bapiya was cursed and became impotent. The curse was lifted only when he worshiped Bahuchara Mata by dressing and acting like a woman. Today Bahuchara Mata is considered patroness of the hijra community in India, and worshipped by them and many other communities in Gujarat. Though many of her followers believe in non-violence and consider killing of all animals and creatures a sin, historically Bahuchara Mata was, like many Hindu gods and goddesses, the recipient of annual animal sacrifices.

Bahucharaji Temple is located in Bahucharaji town in Mehsana district of Gujarat, India. It is 110 km from Ahmedabad and 35 km west of Mahesana. The original temple complex was built in 1783 CE (AD). The temple is nicely decorated with stone carvings. Every year about 1.5 million pilgrims visit this temple. Toda Mata (Bahuchara Mata) is located in Sankhalpur. The origin of Bahuchra Mata is situated at Varakhdiwala temple in Bahuchraji. Because Bhakta VallabhaDhola wrote in his Aanand no Garbo the original place of Bahuchra Mata is situated at between Sankhalpur and Dedana village. The Toda Mata temple in Sankhalpur is 2 kilometers far from Bahuchraji (Bahuchraji).

One famous myth surrounding Bahuchara Mata is about a childless king who prayed before her for a son. She obliged, but the prince Jetho, who was born to the king, was impotent. One night Bahuchara appeared to Jetho in a dream and ordered him to cut off his genitals, wear women’s clothes and become her servant. Bahuchara Mata identified impotent men and commanded them to do the same. If they refused, she punished them by arranging that during their next seven incarnations they would be born impotent. This is how the cult of Bahuchara Mata, whose devotees are required to self-castrate and remain celibate, developed. In one of the many folk stories associated with Bahuchara Mata, the goddess was once a princess who castrated her husband because he preferred going to the forest and “behaving as a woman” instead of coming to her bridal bed. In another story, a man who attempted to molest Bahuchara Mata was cursed with impotence. He was forgiven only after he gave up his masculinity, dressed as a woman, and worshipped the goddess. Another theory says that she is one of the goddesses in Sri Chakra. The real symbol of her vehicle is kurkut which means the serpent which has two mouths. Bahucharaji is seated on the low end and the other end goes to Sahasrara, which means that Bahucharaji is the goddess starting the awakening of kundalini which eventually leads the liberation or moksha.