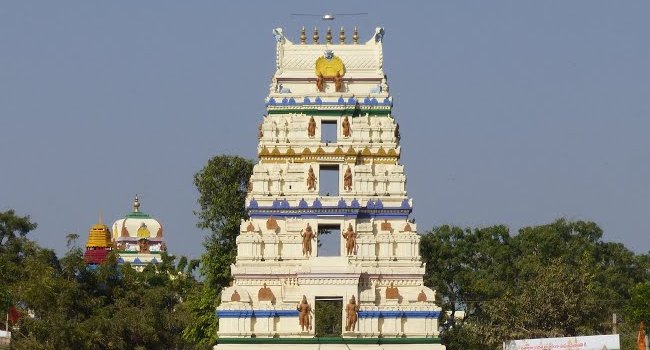 Sri Anantha Padmanabha Swamy Temple, popularly known as the “Ananthagiri Temple” is a Hindu temple located in the Ananthagiri Hills, a picturesque location known for its scenic beauty and soothing weather.

It is around 6 km from the Vikarabad town in Ranga Reddy district of Telangana State. The temple is the holy abode of Lord Vishnu. Sri Nalapur Sitaram Chary is presently the head priest of this temple.

There are many myths and legends related to the origin of the temple. According to Skanda Purana, the temple is believed to be made by Rishi Markandeya in Dwapara Yuga. He did penance for nearly 1400 years for the darshan of Lord Vishnu. He used to go to Kasi to take holy bath in the Ganges through a cave from Ananthagiri. But on one day, as Dwadasi entered the early hours of morning, he was not able to go to Kasi. Seeing his great devotion, Lord Vishnu appeared in front of him in Shali Graha form in the cave and arranged the Ganges to flow near to the place he resides. Another legend says that, after fighting for years with Rakshasas, Sage Muchikonda came to Ananthagiri to take rest and went into deep sleep. He got a boon from Lord that whoever spoils his sleep will be killed by burning to ashes. Kalyavana Rakshasa who followed Lord Krishna and Balarama to Ananthagiri from Dwarka to kill them, spoiled Muchikonda’s sleep and was killed. As a result, Lord Krishna gave darshan as Sri Anantha Padmanabha Swamy to the sage and blessed him to become a river. The same river is now known as Moosi River which flows through Hyderabad. It is also said that during 17th century, Nizams of Hyderabad used to come to this area for hunting and to witness the natural beauty of this place. One day Lord came to a Nizam’s dream and told him to build the temple here. Hence, the temple was then constructed by the Nizams.

It is a small temple with a rock cave kind of enclosure. As the main sanctum sanctorum is inside a small cave, only a few people are allowed at a time. The principle deity of the temple, Lord Vishnu is seen lying on snake that floats upon the cosmic waters of Vaikunta with Goddess Lakshmi seated beside him. The main highlights of this temple are the two large statues of Lord Hanuman and Lord Garuda, welcoming the pilgrims to this holy abode with folded hands at the entrance of the temple.

As indicated by Skanda Purana it is trusted the temple is introduced by the Rishi Markandeya in Dwapara Yuga. Pulled in by quiet environment of Ananthagiri slopes Markandeya Rishi came here for yoga sadhana. Consistently Markandeya used to go to Kasi from Ananthagiri to scrub down in the Ganges through a surrender because of his yoga sadhana. On one day he was not ready to go to kasi as Dwadasi enter the early hours of the morning. Master gave Darshana in dream and organized the Ganges to stream to play out a heavenly shower for Rishi.

APSRTC operates regular buses to Vikarabad from various cities of Telangana and Andhra Pradesh. There are plenty of auto rickshaws and cabs available from Vikarabad to reach the temple. Pilgrims coming from Hyderabad must take a bus to Tandur and should get down at the Ananthagiri Temple Bus stop.

Nearest railway station is at Vikarabad, just 7 km from the temple. It lies on the Mumbai-Hyderabad rail route and is well connected to major cities of India.

Hyderabad Airport is the nearest one, located around 82 km away from the temple. It is well connected to major cities of India and abroad.