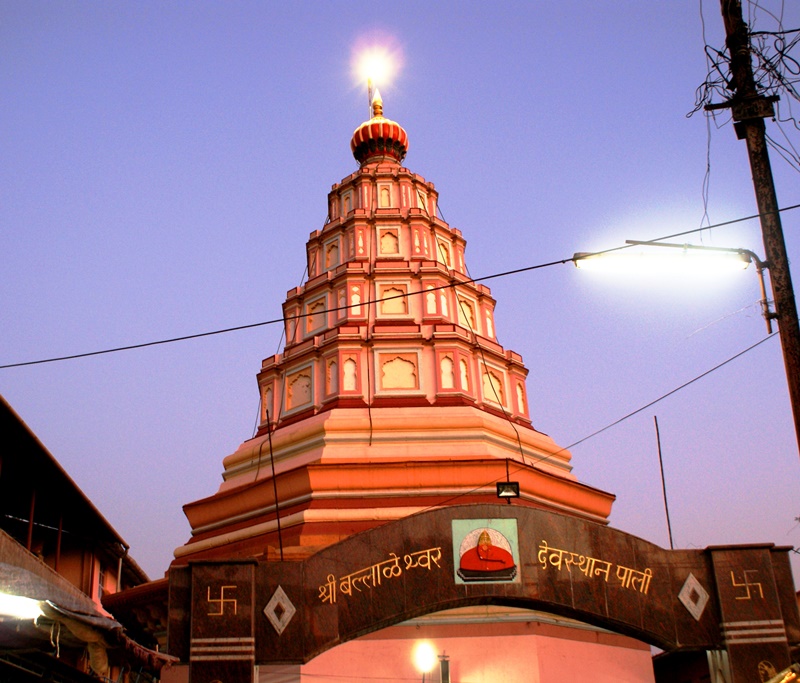 Shri Ballaleshwar Pali Ganpati temple is one of the eight major temples of Lord Ganesha which constitutes the divine Ashtavinayak temples. Among Ganesha temples, Ballaleshwar is the only incarnation of Ganesha that is known by his devotee’s name. It is located in the village of Pali which is at a distance of 30 km from Karjat in the Raigad district. It is situated between fort Sarasgad and the river Amba. The deity is said to be famous for quick response to the prayers.

The Idol of Vinayaka sitting on a stone throne faces east & its trunk is turned left. The idol has two diamonds in his eyes and one in the navel. The background is of silver where one finds Riddhi & Siddhi waving Chamaras.

The present temple’s construction work is said to have been done by Shri Phadnis of Moradabad. It was built in such a way that it was in the form of the word & faced the east so that the rays of the Sun would fall directly on the deity. The main feature of this temple is the 15 foot high sanctum & the gigantic metal bell of the temple made in Europe. After defeating the Portuguese in Vasai & Sasthi, Chimaji Appa brought these bells & offered them at different Ashtavinayak places.

The Ballaleshwar Pali Ganpati temple is the only temple of Ganesh, famous by the name of his devotee and who is dressed up like a Brahmin. The Temple complex is tiled & it encircles two lakes. The water of one lake towards the right is reserved for Vinayak’s Pooja.

There are two Sanctums (Girbhagriha) in the temple. The inner sanctum is quite big & is 15 feet high. Outer sanctum is 12 feet high & it has a rat idol with a Modak in his hands & facing Ganesh.  Temple walls are made quite strong by mixing lead with cement while construction. Hall of the temple is 40 feet long & 20 feet broad & it was built by late Shri Krishnaji Ringe in 1910 A.D. The Hall is very beautiful with 8 pillars resembling Cyprus throne tree. The temple peak (Kalas) is adorned with the golden sheet as a result of donations by devotees. The palakhi used for procession is also covered with silver plates. This also has come from donations. The bathing utensils like circular pot and sitting device upper arms of the idol and central hanging are covered fully with silver plates. Gold and silver crowns decorating the idol and fish are donated by devotees.

Legend of this Ashtavinayak is associated with the devotion of a boy called Ballala to Lord Ganesh. Ballala was an ardent devotee of Lord Ganesh. One day he organized a special pooja in his village- Pali. He invited all other children of that village to take part in that. The pooja went on for several days: devoted children refused to return home before the completion of the pooja by Ballala. This annoyed the parents; they complained to Kalyani Seth- father of Ballala. Kalyani Seth went to the place where the pooja was taking place. He threw the Ganesh idol worshiped by the boy into the forest; beaten him up severely. A seriously injured Ballala, though tired, continued with chanting Lord Ganesh prayers. Pleased with the devotion of the boy, Lord Ganesh appeared before him and healed Ballala. The boy requested Lord Ganesh to take abode at his village. Lord Ganesh agreed and told Ballala that he will be known here by the boy’s name.