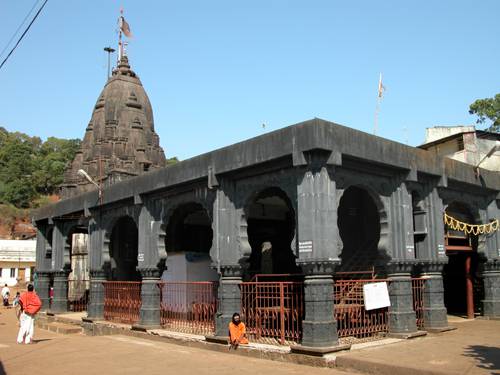 Bhimashankar Temple is a Jyotirlinga shrine located 50 km northwest of Khed, near Pune, in India. It is located 127 km from Shivaji Nagar (Pune) in the Ghat region of the Sahyadri hills. Bhimashankar is also the source of the river Bhima, which flows southeast and merges with the Krishna River near Raichur. The other Jyotirlinga shrines in Maharashtra are Vaidyanath near Parli District.

Long ago in the dense forests of Dakini, on the lofty ranges of the Sahaydris lived an evil Asura by the name Bhima with his mother Karkati. Compassion and kindness shivered in the presence of Bhima. The divine and the mortals were scared of him alike. But he was confronted by certain questions about his own existence which continuously tormented him.

When Bhima could no longer sustain his agony and curiosity, he asked his mother to unveil the mysteries of his life. He urged his mother to tell him who his father was and why he had abandoned them in the wilderness of the forest. After much hesitation and with a lingering fear, Karkati his mother, revealed to him that he was the son of the mighty Kumbhakarna, the younger brother of the Lankadheeswara — the mighty all powerful King Ravana of Lanka.

Lord Vishnu in his incarnation as Lord Rama annihilated Kumbhakarna. Karkati told Bhima, that his father was killed by Ram in the Great War. This infuriated Bhima and he vowed to avenge his father. To achieve this he embarked on a severe penance to please Lord Brahma.

The compassionate creator was pleased by the dedicated devotee and granted him immense prowess. This was a terrible mistake. The evil tyrant caused havoc in the three worlds. He defeated King Indra and conquered the heavens. He also defeated a staunch devotee of Lord Shiva – Kamarupeshwar, and put him in the dungeons.

He started torturing Rishis and Sadhus. All this angered the Gods. They all along with Lord Brahma beseeched Lord Shiva to come to their rescue. Lord Shiva consoled the Gods and agreed to rescue them from the tyrant. On the other hand, Bhima insisted and ordered Kamarupeshwar to worship him instead of Lord Shiva.

When Kamarupeshwar denied, the tyrant Bhima raised his sword to strike the Shiva Linga, to which Kamarupeshwar was doing abhishekam and pooja. As soon as Bhima managed to raise his sword, Lord Shiva appeared before him in all his magnificence.

It is believed that the sweat that poured forth from Lord Shiva’s body after the battle formed the Bhimarathi River.

Although the present structure of the temple appears to be of comparatively recent origins, the shrine Bhimashankaram (and the Bhimarathi river) have been referred to in literature dating back to the 13th century. Built in the Nagara style of architecture, this temple is a modest yet graceful temple and dates back to the 18th century. One can also find borrowed influences from the Indo Aryan style of architecture.

It is believed that the ancient shrine was erected over a Swayambhu Lingam (that is the self emanated Shiva Lingam). It can be seen in the temple that the Lingam is exactly at the centre of the floor of the Garbagriham (the Sanctum Sanctorum). Intricate carvings of divinities interspersed with human figurines adorn the pillars and the doorframes of the temple. Scenes from mythology find itself captured in these magnificent carvings.

Within the temple precincts there is also a small shrine dedicated to Lord Shani Mahatma (also called Shaneeswara). The image of Nandi Lord Shiva’s vahanam is installed as is the case with all the Siva Temples, just at the entrance of the temple.

This temple is closely associated with the legend of Shiva slaying the demon Tripurasura associated with the invincible flying citadels Tripuras. Shiva is said to have taken abode in the ‘Bhima Shankara’ form, upon the request of the Gods, on the crest of the Sahyadri hills, and the sweat that poured forth from his body after the battle is said to have formed the Bhimarathi River.

The Gopura-shikharam of the temple was built by Nana Phadnavis. The great Maratha ruler Shivaji is also said to have made endowments to this temple to facilitate the carrying out, of worship services. As with other Shiva temples in this area, the sanctum is at a lower level. The ‘Shani temple’ is located inside the main complex of the temple of Bhimashankar.

Between the two pillars outside the ‘Shani’ temple, one comes across an ancient huge Portuguese bell. Behind the temple, there is a small pathway that leads us to the banks of a river. “Stepping out from the Temple one is awed with a bewitching view of the virgin wilderness occasionally interrupted by the glimpses of the majestic forts on the surrounding mountains greets us.”

History unveils itself in the peaks of the Sahayadris. Bhimashankar – a place where spiritual splendor merges with nature’s magnificence is definitely a pilgrim’s paradise. There are other temples and shrines, near the main temple. There is a shrine to Kamalaja near the Bhimashankara temple. Kamalaja is an incarnation of Parvati, who aided Shiva in his battle against Tripuraasura. Kamalajaa was worshipped with offerings of lotus flowers by Bhrama.

There is a shrine for Siva Ganams, Shaakini and Daakini who assisted Shiva in the battle against the demon. Kaushika Maha Muni is said to have done ‘Tapas’ (penance) there. The place where he bathed is called Mokshakund thirtham, which is located behind the Bhimashankara temple. There are also the Sarvathirtha, the Kusharanya thirtha where the Bhima river begins to flow eastward, and the Jyanakund.

As perShiv Mahapuran, once Brahma (the Hindu God of creation) and Vishnu (the Hindu God of saving) had an argument in terms of supremacy of creation. To test them, Shiva pierced the three worlds as a huge endless pillar of light, the jyotirlinga. Vishnu and Brahma split their ways to downwards and upwards respectively to find the end of the light in either direction. Brahma lied that he found out the end, while Vishnu conceded his defeat. Shiva appeared as a second pillar of light and cursed Brahma that he would have no place in ceremonies while Vishnu would be worshipped till the end of eternity.

The jyotirlinga is the supreme partless reality, out of which Shiva partly appears. The jyothirlinga shrines, thus are places where Shiva appeared as a fiery column of light. There are 64 forms of Shiva, not to be confused with Jyotirlingas. Each of the twelve Jyotirlinga sites take the name of the presiding deity – each considered different manifestation of Shiva. At all these sites, the primary images are lingam representing the beginning less and endless Stambha pillar, symbolizing the infinite nature of Shiva.