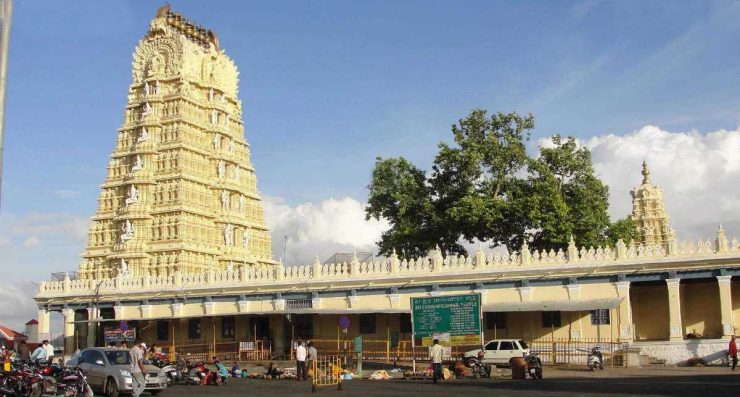 The Chamundeshwari Temple is located on the top Chamundi Hills about 13 km from the palace city of Mysore in the state of Karnataka in India. The temple was named after Chamundeshwari or Durga, the fierce form of Shakti, a tutelary deity held in reverence for centuries by Mysore Maharajas.

Shakti Peethas are divine seat of Shakti due to the falling of body parts of the corpse of Sati Devi, when Lord Shiva carried it and wandered in sorrow. There are 51 Shakti Peeth linking to the 51 alphabets in Sanskrit. Each temple have shrines for Shakti and Kalabhairava.

The Hair of Sati Devi is said to have fallen here, the Shakti is addressed as Chamundeshwari Devi. The original shrine is thought to have been built in the 12th century by Hoysala rulers while its tower was probably built by the Vijayanagar rulers of the 17th century. In 1659, a flight of one thousand steps was built leading up to the 3000 foot summit of the hill. At the temple are several images of Nandi (the bull mount of Shiva). There is a huge granite Nandi on the 800th step on the hill in front of a small Shiva temple a short distance away. This Nandi is over 15 feet high, and 24 feet long and around its neck are exquisite bells.