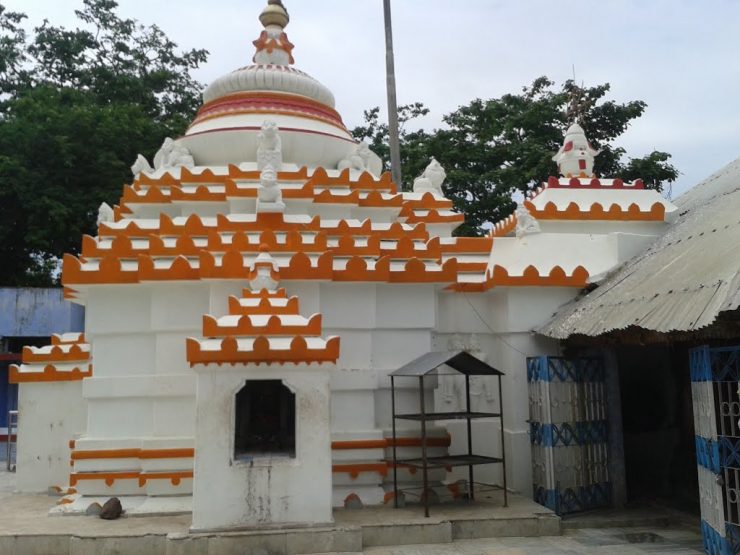 Charchika Temple is one of the oldest Shakta places in Orissa. It is located in a small town of Banki of Cuttack district in Odisha. The presiding deity is an eight-armed goddess Chamunda, locally known as MaaCharchika Devi. She is seated on a prostrate human body and wearing a garland of human skulls. She displays khadga, shula, katari and varadamudra in her four right hands whereas the four left hands represent severed head, blood-cup, ‘’damru’’ and leaving a finger of the remaining hand soaked in blood. This temple is situated on the top a small hillock RuchikaParvata on the bed of the Renuka River in the small town of Banki in Cuttack district of Orissa.

The present temple was reconstructed in the 19th century. But the remarkable point is the enshrining deity MaaCharchika on iconographical point of view can be assigned to the 9th – 10th centuries A.D. i.e. Bhaumakara rule in Orissa. It is believed that the Charchika idol was created by Parashurama. The temple has a pidhavimana, jagamohana and a wooden mandapa known as “sunyavahinimandapa” of impoverished Kalingan order. Stone is used for the construction of the temple and the entire surface is thickly lime plastered and white washed. The ceiling of the mandapa is made of wood whereas the pillars are in stone. The ceiling of the mandapa is profusely carved and painted. The wooden ceiling of the mandpa is relieved with episodes from BhagavataPurana with intervening decoration of animals and birds like – elephant, duck, parrot, peacock, etc.; floral motifs, lotus medallions, scroll and jali works, animal hunting, horse rider, gaja-vidalas, makaramukha,mithuna and maithuna images. Besides, the parsvadevata niches enshrine four-armed Chamunda, four-armed MahisasuramardiniDurga and an eight-armed Chamunda on the north, west and southern side respectively.

The RenukaRiver was recreated by the flood of 1982. It’s believed that one devotee who worshiped MaaCharchika after pleasing her took away all ornaments of MaaCharchika and build a house where River Renuka is currently flowing. As MaaCharchika was not happy so she created this River Renuka to punish him and to make him home less. This temple is situated in the heart of Banki. It’s good to visit the temple at the time of Durga Puja, a Hindu festival in the month of October thousands of devotee used to come to get the blessing. Kumar Purnima a Hindu festival celebrated 5 days after Dusshera is very famous here.