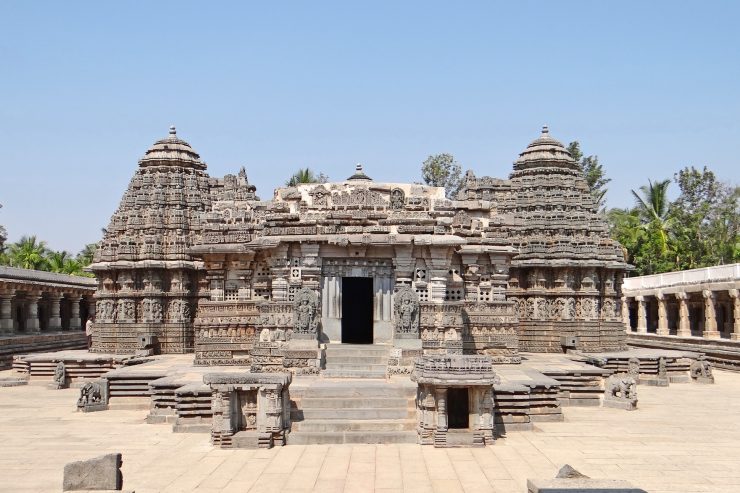 The Chennakesava Temple (also spelt Chennakeshava) located at Somanathapura is one of the finest examples of Hoysala architecture. The temple was built by Soma, a Dandanayaka (lit, “commander”) in 1268 C.E. under Hoysala king Narasimha III, when the Hoysala Empire was the major power in South India.

The ceiling of the mantapa (hall) is supported by lathe turned pillars, a standard feature in Hoysala constructions. Between pillars, the ceiling is domical and intricately decorated. These decorations could include multi-petalled lotuses, banana bud motifs based on stepped ponds and snake like (ananta) knots (symbolising eternity). Of the three shrines, one shrine has the image of the god Keshava, but the image is missing from the sanctum. The other two shrines house images of Janardhana and Venugopala (all three images are forms of the Hindu god Vishnu). This is strictly a Vaishnava temple and there are no depictions of any forms of the Hindu god Shiva. Other sculptures include of depictions of affluence of that age including members of the royal family riding richly decorated chariots, soldiers and commoners riding horses, camel drawn vehicles, dancers, musicians, hunters armed with bows and arrows and accompanied by their dogs, all heading for a hunt. There are sculptures of royal palaces protected by armed guards, intricate carvings of jewellery, such as pendants, necklaces, waistbands and rings and of woman sporting hair styles that were in vogue. The names of many architects and sculptors are etched on stone from which it is evident that the artists were both local and from outside the region. Famous among them are the locals such as Ruvari Mallithamma, Masanithamma, Chameya, Rameya, Chaudeya and Nanjeya while Pallavachari and Cholavachari are prominent artists from Tamil country. 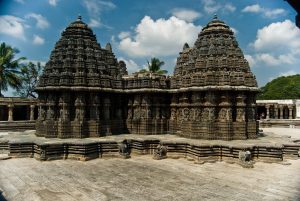 The temple is housed inside an impressive high walled enclosure and the entrance to the complex is through a porch with tall lathe-turned pillars. The material used for the temple is soapstone (Green schist). The Keshava temple standouts out as one of the finest the Hoysala architects produced. Its symmetrical architecture, fine sculptures on equally prominent shrines, and panel sculptures form a cloister that speak of good taste. While there are Hoysala temples with better sculpture and others with better architecture, this temples satisfies all requirements. According to the Mysore archaeological reports, it was built by the famous architect and sculptor Ruvari Malithamma who was well known for his expertise in ornamentation.

The temple which is built on a jagati (platform) is a trikuta (triple shrine) and fully satisfies that terminology as all shrines (vimanas) have a superstructure (tower) that is intact. Inside the temple, each vimana has a vestibule that connects it to the main rectangular mantapa (hall). Like the shrines, all three vestibules also have their own tower called the Sukanasi (or nose), though it is shorter and hence looks like a low extension of the main superstructure over the shrine. The outer walls of all three shrines, their towers and Sukanasi are equally well decorated, making it overall a very well balanced design. The temple stands on a jagati (platform) and the three vimanas are located at the back and are connected by a common rectangular closed mantapa. The jagati closely follows the plan of the temple exterior and there is a gallery with lathe-turned pillars all along the enclosure of the temple complex which adds to the effect. There is one flight of steps that leads to the jagati and one that leads from the jagati to the mantapa. The wide jagati invites devotees to follow the ritualistic clockwise circum-ambulation before entering the hall. The full effect of the rectangular hall is seen only when the temple profile is viewed. The hall has sixteen bays. The moldings on the outer wall of the mantapa has well decorated reliefs and friezes, with pierced windows screens above them.

All the three shrines are 16 pointed stellate (star-shaped) in design and their towers follow the same pattern. Hence the whole structure looks like a rhythmic progression of well decorated projections and recesses (called architectural articulation).