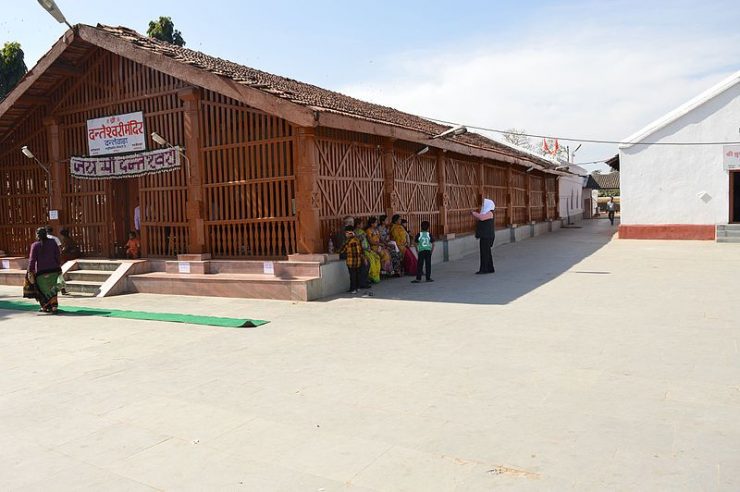 Danteshwari Temple is temple dedicated to Goddess Danteshwari, and is one of the 52 Shakti Peethas, shrines of Shakti, the divine feminine, spread across India. The temple built in the 14th century by the Chalukyas of the South, is situated in Dantewada, a town situated 80 km from Jagdalpur Tehsil, Chhattisgarh. Dantewada is named after the Goddess Danteshwari, the presiding deity of the earlier Kakatiya rulers. Traditionally she is the Kuldevi (family goddess) of Bastar state.

The temple is as according legends, the spot where the Daanth or Tooth of Sati fell, during the episode when all the Shakti shrines were created in the Satya Yuga.

Every year during Dusshera thousands of tribals from surrounding villages and jungles gather here to pay homage to the goddess, when her idol was taken out of that ancient Danteshwari temple and then taken around the city in an elaborate procession, now a popular tourist attraction part of the ‘BastarDussehra’ festival. There also a is tradition of lighting JyotiKalashas during Navaratris here.

Situated in Dantewada, south-west of Jagdalpur, at the confluence of the holy rivers Shankini and Dhankini,both the rivers have different colors,this six-hundred-year-old temple is one of the ancient heritage sites of India and is a representation of the religio-socio-cultural history of the Bastar region. Little is known about this shrine to much of India. The vast temple complex today is truly a standing monument to centuries of history and tradition. With its rich architectural and sculptural wealth and its vibrant festival traditions, Danteshwari Mai temple serves as the most important spiritual center for the people of this region.

It is believed that a tooth of Sati had fallen here and Danteshwari Shakti Peetha was established. According to the ancient legend, Goddess Sati committed self-immolation in the fire pit of yagnakund, due to an insult committed by her father Daksha towards her consort Lord Shiva during the Yaga. Raged by the death of Sati, Lord Shiva destroyed the Yaga of Daksha and with the body of Sati in his hands started to do ‘Taandav’.Lord Vishnu cut the dead body of Goddess Sati with his Sudarshan to free Lord Shiva from the grief caused by her death. Parts of the dead body of Goddess Sati were scattered to fifty-two different places, which were consecrated as Shakti Pithas.

The Danteshwari temple was built in the 14th Century by the Chalukya kings in South Indian style of temple architecture. The idol of Danteshwari Mai is chiseled out of black stone. The temple is divided into four parts such as GarbhGriha, MahaMandap, MukhyaMandap and Sabha Mandap. GarbhaGriha and MahaMandap were constructed with stone pieces. There is a Garuda Pillar in front of the entrance of the temple. The temple itself is located in a spacious courtyard surrounded by massive walls. The shikhara is adorned with sculptural finery.