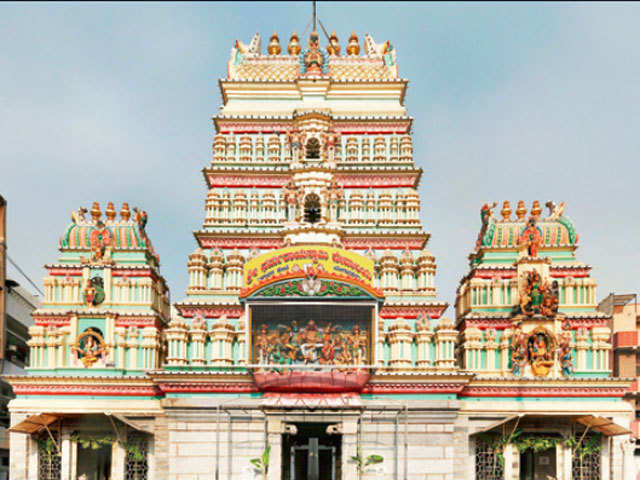 Shri DharmarayaSwamy Temple is one of the oldest and famous temple situated in Bangalore city. It is unique as it is dedicated to the Pandavas and not found anywhere else in India.

The exact historical background of the city and the history of the temple like the name of the builder, date of construction is not clear.

When we look at the history of the temple, it is believed that the temple was constructed by the Ganga Arasu people. These people also known as Vanhi Kula Kshatriyas or “Thigalas” The Archeology survey department which has undertaken a study of the stone and masonry has concluded that this temple is about 800 years old. It is also learnt that when Bangalore city was built by Kempe Gowda in the 16th century, the KempegowdaGopuras (towers) were built in the four corners of the city keeping the Sri Dharmarayaswamy Temple vimanagopurakalasa as a centre point. The four towers are the Ulsoor tower in the North-East, The Bellary Road Tower in the North-West, The Lalbagh Tower in the South-East, and TheGavipura Tower in the South-West.

The GongaArasu or Ganga Arasu kings used to build their towns near lakes or river beds and also, built their temples at a lower level to the ground with a further lower level pradakshinapatha. Sri DharmarayaSwamy temple was built in the Sidhikatte lake bed area & it is below the land level that existed prior to current Bangalore. It is also learnt that this old town was called as Kalyanapuri, a Town of Temples, and Ponds& Religious centres. Later, it was named as “Bendhakaluru” and then as “Bengaluru”.

Bangalore Karaga is a famous festival celebrated in honour of Mother Goddess Draupadi. It celebrates the triumph of good over evil, which is also symbolic of the power of women.

Karaga begins with the flag hoisting ceremony (Dhwajarohana). On the first day, the Veerakumaras and the priest wear janivara (sacred thread worn as a band over the left shoulder) and kankana(sacred thread tied on the wrist). Prayers are offered by the priest, the Veerakumaras and the Chakridaararu. From 2nd to 6th day, aarthi is performed in the evenings at the Cubbon Park shaktipeeta and then at eight water sources used during the celebration. On the 6th day, women pray to Mother Draupadi Devi and perform an elaborate aarti. This ritual is also called as the festival of lights. The 7th day is known as Hasikaraga, during which, the goddess is symbolically readied for her marriage. She emerges from the lake, decorated as a bride and carries the kalasha(pot). The Veerakumaras pay their obeisances to her and escort her to the Sri Dharmarayaswamy Temple. On the 8th day, Pongal, prepared by the wives of the Veerakumaras, is offered to the goddess.

On the full moon day, the marriage of the goddess is performed and the utsavmurthis are taken in a procession. This procession is performed in the night and this is the famous Karaga procession. The procession does not stop anywhere and is always in a dynamic state. The Prasada of lime received from the goddess is said to bring relief from ailments and misfortunes. The 10th day is Shanthipooje to Potha raja, a guardian deity and the brother in law of the Pandavas. The 11th day is Vasantautsava and finally, the flag is brought down signalling the end of festivities.

Interestingly, the Karaga priest has to perform austerities for six months before the Karaga and during this period, he wears his wife’s Mangala sutra. It is returned to the wife during a symbolic marriage ceremony on the 10th day of Karaga. She will not be seeing her husband from the time of Vijayadashami as he will reside in the temple till the Karaga is over. So when the Karaga procession stops in front of her house, unlike the other devotees, she cannot come out to be blessed.

Gowdas, Ganacharyas, Chakridaararu are the ordained sects among the Vahnikula Kshatriyas to carry the tradition of conducting the Karaga. Chakridararu are those who perform the various pooja activities at the time of Karaga. These include the ghantepoojaris, who are the gurus and carry out the temple rituals, the family of the Karaga priest, the descendants from the clan of Potaraja, Banka dasayya (announcers of the Karaga) and Kolkararu (messengers). These five families have a Kula purohita (clan priest), who is a Brahmin. He performs rituals as per the shastras (sacred texts). All the rituals are steeped in secrecy. Overall management and supervision of the festivities is done by Ganacharyas. All these categories of functionaries are supervised by the Gowdas, who ensure smooth functioning. Karaga or Karagaattam actually represents a dance by females, generally Devadasis.

The temple records reveal that Sri ImmadiKrishnarajaWodeyar of Mysore visited the temple in 1811 A.D. to confirm for himself the fame and real truth of KaragaShakthyotsava since it was as famous as the Mysore Dasara even during those days. The king brought two sharpened swords (Alagu) as presents to the temple, to perform the Aluguseva with these alagus and to test whether the Alaguseva was true of not. The Veerakumaras of the temple accepted the alagu and performed the Alaguseva. The two swords broke into pieces when the Veerakumaras offered alaguseva to the Goddess. The king was overwhelmed and became an ardent devotee of the goddess AdhishakthiDraupadi. After this incident, it is said that the king’s sick mother recovered from a fatal disease and the king also had a peaceful and prosperous life. The king was happy and donated huge properties in the form of land and jewels to the temple.

More than the Historical references and its backgrounds, the practices followed by the temple serve as a proof of its antiquity. The sthothras recited during the KaragaShaktyotsava are in the aravu language, spoken prior to the historical period.