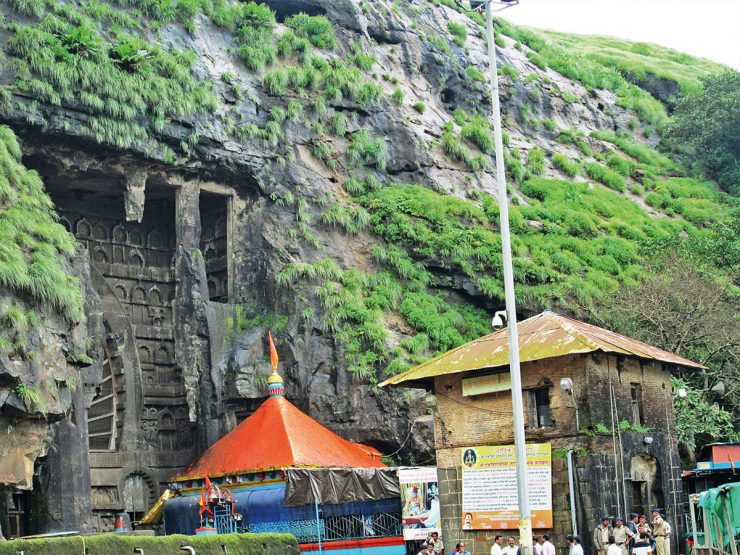 In Hinduism Goddess Ekvira also worshipped as Renuka in different parts of India and Nepal is mother of Chiranjivi or immortal sage Parashurama.The Ekvira Aai Mandir is a Hindu temple located near the Karla Caves near Lonavala in Maharashtra, India.

Here, the worship of the goddess Ekvira is carried on right next to the caves, once a center of Buddhism. The temple is a prime spot of worship for the Aagri-Koli People. But along with the Koli (fisherman) folk, Ekvira is worshipped by many people especially those belonging to the CKP & Daivadnya Brahmins caste as their presiding family deity, Kuldaivat.

This temple-complex originally consisted of three alike shrines built in a row all facing west. Of these, the central and the southern shrines are preserved in full and rest of the structures are preserved only on plan and that too brought to light in the clearance work. Maha-mandapa, varsha-mandapa and gopura are situated in front of these three shrines and these three shrines are surrounded by sixteen shrines of additional parivara devatas.

The devotees throng the temple on all occasions of Navaratri and Chaitri Navratra to worship and celebrate. Animal sacrifices are also offered in this temple, including the sacrifice of goat or chickens. It is believed that the Goddess has majestic powers.

According to the legend, this temple was constructed by the Pandavas during their exile in the forest. Once when Pandavas visited this holy place, Ekvira appeared before them. She instructed them to build a temple for her. To test the ka