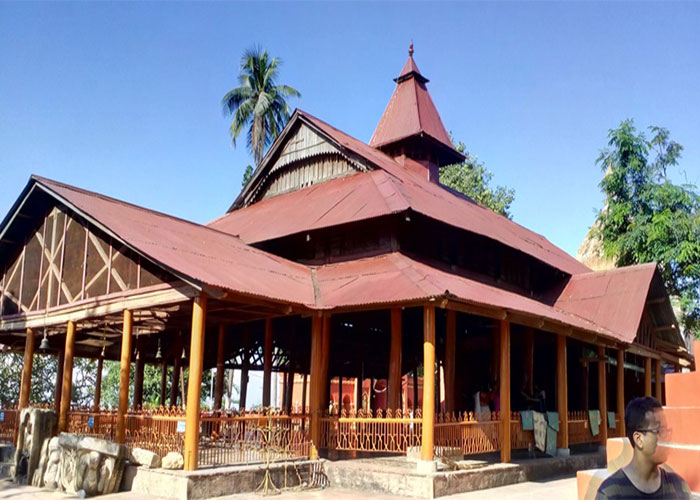 Hayagriva Madhava Temple is situated on the Monikut hill. The hill is situated in Hajo of Assam which is around 30 km to west of Guwahati. The present temple structure was constructed by the King Raghudeva Narayan in 1583.

According to some historians the King of Pala dynasty constructed it in 6th century. It is a stone temple and it enshrines an image of HayagrivaMadhava. Some Buddhists believe that the HayagrivaMadhava temple, best known in the group of Hindu temples, is where the Buddha attained Nirvana.

At this imposing temple, the presiding deity is worshipped as the Narasimha incarnation of Vishnu by the Hindus. It is a stone temple and it enshrines an image of HayagrivaMadhav. The rows of elephants are seen on the body of the temple and they are fine specimens of Assamese art.

There is a big pond known as Madhab Pukhuri near the temple. Doul, Bihu and Janmastami festivals are celebrated every year in the temple. Moreover, this temple preaches both Hinduism and Buddhism, which attract Buddhist Monks from far flung places. Sayani, the first wife of KaliaBhomoraBorphukan donated a family of paiks and also a plot of land for their maintenance to the HayagrivaMadhava temple during the reign of Ahom king KamaleswarSingha.