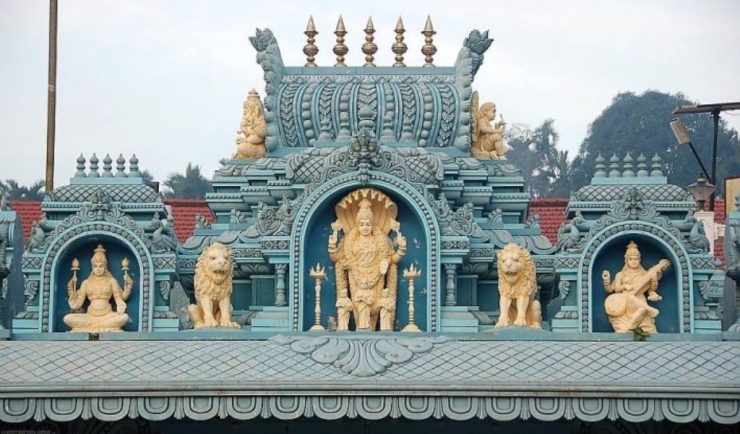 The word Annapoorna can be seen as a conjunction of two words- Anna meaning food or grains and Purna meaning complete and perfect. Sri Annapoorneshwari is the Goddess of food and nourishment. She is considered to be an avatar of Goddess Parvati, wife of Lord Shiva. Her importance can be gauged by the fact that she is praised and glorified in several ancient scriptures like Annapurnamantratsava, Maha Tripurasiddhanta, Annapurna Kavacha, Annapurnahavamti, Annapurnamalininaksatramalika, Bhairvahyantantra, Rudrayamala, and Sivarahasya. 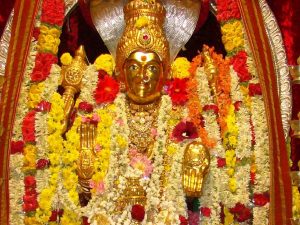 To visit the Horanadu Annapoorneshwari Temple, devotees have to climb a few steps to reach the main temple complex. The Gopuram of the Temple is adorned with various sculptures of Gods and Goddesses. A mandapam can be seen on the left of the main entrance. A queue complex next to the Mandapam is present for entry into the main hall where Annadanam is conducted every day.  Towards the back of the Horanadu Annapoorneshwari Temple, a commercial complex of four to five shops is present that sell Pooja materials as well as small toys and gifts from Horanadu. The main temple is small but well organized. The ceilings of the temple are carved meticulously.

The idol of the main deity of the Horanadu Annapoorneshwari Temple, Sri Annapoorneshwari is made of gold. The Goddess has a standing posture with four hands, each holding a Shanka, Chakra, Sri Chakra, and Devi Gayathri. 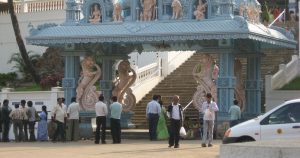 The Punarprathisthapan of Sri Annapoorneshwari took place in 1973 and the Mahakumbhabhishekam was performed by Jagadguru Shankaracharya Sri Abhinava Vidyathirtha Mahaswamiji of Sringeri Sharada Peetham, Sringeri.

The sixth Dharmakartharu constructed the Navagraha Temple. He also established the steam cooking system in the Temple Kitchen, Annachathra, and Guesthouses for pilgrims and the labor colony.

By Air: The nearest airport is Mangalore International Airport. Mangaluru can be reached via Karkala and Kalasa by road.

By Train: The nearest railway station to Horanadu is situated in Kadur. It is about 130 km away from Horanadu.  From the railway station, you can get a taxi to reach Horanadu.