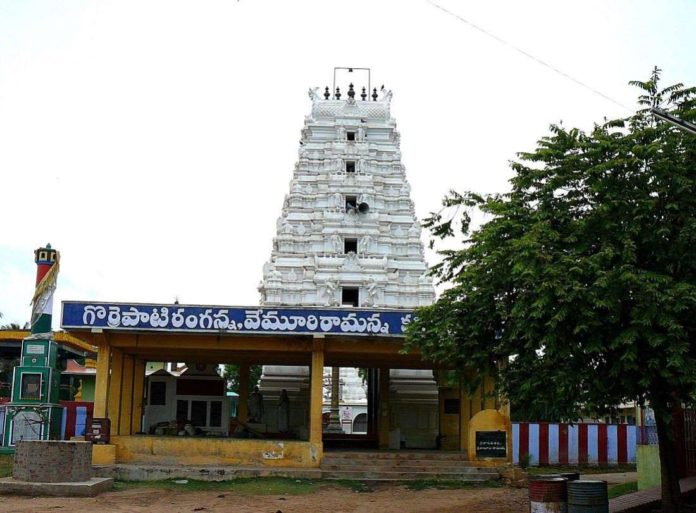 Contents hide
1 About Jaladheeswara Swamy Temple
2 Salient features of the temple:
3 Specialty
4 Pooja Timings:
5 How to Reach:
6 Share this:
7 Like this:
8 Related

Jaladheeswara Swamy Temple, popularly known as Sree Balaparvati Sametha Jalasheeswara Aalayam is in a village named Ghantasala in Krishna District, Andhra Pradesh.
According to Dr. D. Kannababu, assistant superintendent, Archaeology Survey of India, “Jaladheeswara Temple was the fourth ancient temple in Andhra Pradesh. From the evidenced existing today, this temple existed before 2nd century A.D. This siva Lingam has similar features with some of the ancient temples like Gudimallem (Chittor district near Sri Kalahastri), Amarvati,Draksharamam.” It is one of the more ancient temples, believed to exist before 2nd century A.D. The fact that Siva and Parvathi are placed on a single “peetam” (panavattamu) makes the temple different from many other ancient temples like Srisailam and Srikalahastri.

Salient features of the temple:

It is believed that the idol of Lord Shiva and Goddess Parvati was installed by Agastya Maharshi, one of the saptarshis who are extolled at many places in the Vedas and a revered Vedic sage and earliest Siddhar. The Shivalingam in Jaladeeshwara Swamy temple is believed to have similar features with the other Shivalingam in Gudimallem temple, Amarvati temple, Draksharamam temple. The temple has a separate shrine of Lord Nandeeshwara, which looks different from other temples with ever beautiful attribute.

The other deities of the temple are Lord Ugra Narasimha, Lord Kalabhairava, Dwarapalakas, and Goddess Saraswati. It is said that visiting this temple is equivalent to receiving the auspicious sight of 12 Jyotrilinga temples, and 18 Shakti Peetha temples because of the unique feature of Lord Shiva and Goddess Parvati placed together.

By Road: Government Buses and private travel buses from all places in Andhra Pradesh and Telangana are available to reach this Jaladheeswara Temple in Ghantasala.

By Train :The nearest Railway station to reach Jaladheeswara Swamy temple is Machilipatnam Railway Station which is 27 km away.

By Air: The nearest airport to reach Jaladheeswara Swamy temple is Vijayawada which is 50 km away.