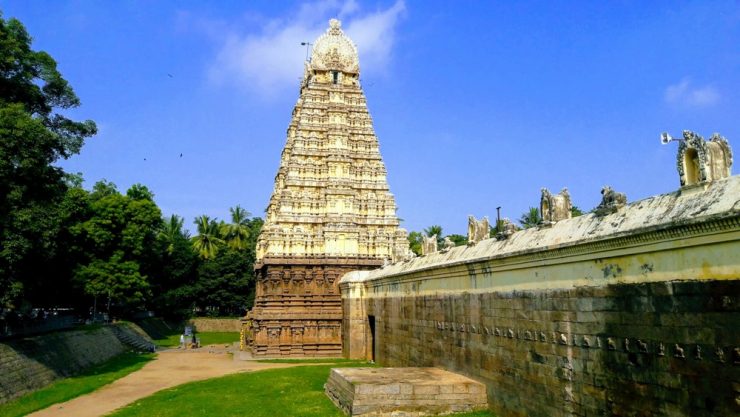 Contents hide
1 About Jalakandeswarar Temple :
2 Mythological Background:
3 History:
4 Architecture:
5 Best time to visit:
6 How to Reach:
7 Share this:
8 Like this:
9 Related

Jalakandeswarar Temple is located in the city of Vellore, precisely within Vellore Fort. It is a Hindu place of worship in honour of Lord Shiva, who also goes by the name of Lord Jalakandeswarar. The temple is a magnificent representation of grand Vijayanagaram Architecture. Besides, one may also observe detailed sculptures dedicated to other Hindu deities such as Lord Vishnu, Goddess Mahalakshmi, Goddess Parvati, Lord Brahma, and Goddess Saraswathi.

The Jalakandeswarar Temple is a highly regarded landmark highlighting the architectural skill of ancient times, while showcasing the significance of special traditions upheld by the Hindu community, which invoke feelings of peace and a connection to the divine. A visit to this site is a delight for devotees, historians, and those who appreciate authentic art.

According to folktales, Jalakandeswarar Temple has initially been a prominent ant-hill, surrounded by water collected as a result of rainfall. A Shiva Lingam (a symbol of Lord Shiva, a Hindu deity), was placed at this position and consequently worshipped by devotees. However, soon after a chieftain at that time who was in charge of the fort, Chinna Bommi Nayaka, had a dream where he believed that Lord Shiva had asked him to construct a temple at the site. As a result, Chinna Bommi Nayaka went ahead to follow the divine instructions he had received at built a temple in 1550 AD.

The temple mainly consisting of a Lingam, engulfed by water is named Jalakandeswarar Temple to pay tribute to these physical aspects. The structure of this place of worship was constructed during the rule of the Vijayanagara Empire (1540 – 1572 AD). However, during the Muslim invasion, the temple was vandalised. At this time, the idol of the main supreme being of the temple was salvaged by devotees and shifted to the Jalakanda Vinayakar Temple in Sathuvacheri, where it remained for an extended period. The idol was then secretly returned to the fort in 1981, and the site was officially reinstated as a Hindu temple, open for public access. The temple is currently managed and conserved by Archaeological Survey of India under the guidance of the Government of India.

The grand Jalakandeswarar Temple is a magnificent representation of grand Vijayanagaram Architecture. The temple features: intricate embellishments; life-like statues, sturdy pillars made of rock that have been fashioned into symbolic creatures such as dragons, lions and horses; a large porch (Mandapam); an enormous tower (gopuram). This model of architectural expertise also accommodates a well, known as the Ganga Gouri Theertham, from which water is extracted for the purpose of bathing the statues of supreme beings (Abhishekam).

The best time to visit the temple is during festivals including Chitra Poornima (a ten day period in April / May), Surasamharam in Aippasi (October / November), Aadi Pooram (a ten day period in July / August), Vinayaka Chaturthi in Avani (August / September), and Navratri (September / October). The exact dates of these festivals vary according to the lunar calendar.

Bengalore airport is the nearest airport located at a distance of 200 km. It is well linked with all the major cities of the country. One does not need to worry how to reach Vellore by air as it has a great connectivity. From the airport, buses and taxis are available from the airfield to reach here.

The Tamil Nadu state buses as well as the private bus services makes it possible for all to reach the city with ease and at an affordable cost. Tirupati is located at a distance of 90 km from this lively city while Chennai and Pondicherry are some 130 km and 135 km away respectively. You can visit Bangalore within 3 hours from the city which is just 170 km from here. Thanjavur, at a distance of 240 km, is another major destination near Vellore.