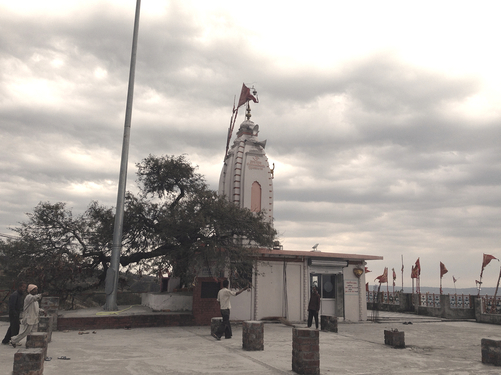 According to the story, there were demons who were harassing gods over the Himalayan Mountains. Gods decided to destroy them. Lord Vishnu was leading them. The Gods focused their strengths in a huge flame which rose from the earth. Out of the fire a young girl took birth and regarded as Adishakti (means first shakti). She grew up in the house of Prajapati Daksha. She used to be called as Parvati or Sati. Later she became wife of Lord Shiva

Once, Prajapati Daksha insulted Lord Shiva. Parvati was unable to accept this and she killed herself. When Lord Shiva came to know about her wife’s death, there were no boundaries of his extreme anger. He began stalking the three worlds while holding Sati’s body. The other Gods approached Lord Vishnu for help as they were afraid of Lord Shiva’s rage. Lord Vishnu shot arrows which severed Sati’s body into fifty one pieces. Where ever the pieces fell, the fifty one sacred Shaktipeeths came into existence. It is believed that at Julfa Mata temple, Sati’s hair fell. The word ‘julfa’ means hair.

Lots of devotees visit the temple. The temple is situated on the hills of Nangal – Hambewal road. The temple is around five kilometers away from the NangalTownship. In early days there was no road to the temple. People used to go by foot. Now there is a road and people are able to take their vehicles there.

Near the entrance of the temple, on the right hand side, there is a Shiva temple. There is a Peepal (Bo or Sacred Ficus) tree and devotees tie threads to that. The thread is known as moli. There is a belief that deity fulfills all the wishes of devotees. Inside temple there is idol of Mata. There is a priest who takes care of temple. Devotees usually bring offerings for the Devi. The offerings includes sweets (Sujihalwa, laddu, barfi), kheel (sugar-coated puffed rice), narial (coconut) and flowers. In navarats and saavan days, the temple gets decorated with lights etc.