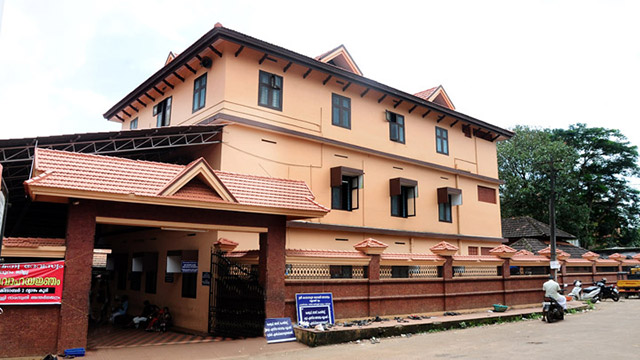 Kadampuzha Devi Temple is a Hindu temple and pilgrimage center at Kadampuzha, near Kuttippuram in Malappuram district, Kerala, India. The temple is dedicated to goddess Durga(Form of Goddess Parvati) , a Devi. There is no idol in the temple.

The temple, owned by Malabar Devaswom Board under the Government of Kerala, is administered through a trust consisting of the Hindu-Variar family and non hereditary co-opted trustees.

There is another temple, MadambiyarKavu Temple, situated a short distance away from the Kadampuzha Devi Temple, which was originally constructed and maintained by the “Thekkencheri” Nair family. The idol of the MadambiyarKavu Temple is god Siva in his “Kirata” incarnation.

Poomoodal (covering the deity under a heap of freshly picked flowers) is the highest puja done in the temple. The Poomoodal offering is being done between 0900-1100 after which the temple will be closed after morning pujas by 1100.

Muttarukkal, another offering, involves breaking coconuts before the deity by the pujari, correctly into two equal halves, and is used for warding away problems in the life of the devotees. The word itself means “keeping away obstacles”. If an offered coconut fails to be broken into two exact halves, then fresh coconuts are broken until one is broken “correctly” – ensuring that the problem has been solved by the divine interference of the deity.

The legends surrounding the Kadampuzha Devi are related to Arjuna, one of the heroes of the epic Mahabharata.

Arjuna fought with god Siva during the Kirata incarnation (he was accompanied by Devi Parvathy during her Vanadurga incarnation).

A demon named Mukasura took the form of a wild boar and started destroying the trees and shrubs around Arjuna. Arjuna was in deep meditation at the time, in order to get the Pasupathasthra (a divine arrow named “Pasupatham”) from Lord Paramasiva.

Both Arjuna and Shiva shot at the wild boar and both claimed that his arrow had killed the animal. They argued, and finally agreed to fight a battle with bow and arrow. The victor of the battle would also get the honour of being the killer of the wild boar. The ensuing battle was fierce and Arjuna was defeated. Despondent over the defeat, Arjuna placed a big stone in front of him and started praying to the mother of the universe Parasakthi while showering flowers over the stone. He was amazed to see that the flowers fell at the feet of the Kirata and Kirati. He realised that those people were actually Lord Paramasiva and Devi Parvathy. The Lord and Devi Parvathy were pleased with Arjuna and gave him the Pasupathastra arrow.

Another legend says that Adi Sankaracharya, during his travels, once happened to pass through Kadampuzha, which was then a grassland. At one place he could not pass further, as he seemed to strike an invisible wall. He understood it to be the meeting point of the Goddess Parasakthi in her Devi Parvati incarnation and Lord Parameswara in his “Kirata” incarnation. AdiSankaracharya prayed to the Devi and she appeared before him. After blessing him, the goddess disappeared into a small hole in the ground. He did the first poojas to the devi there on that day in Vrishchikam (November–December) and the sanctum of the temple is said to have been built around that hole.