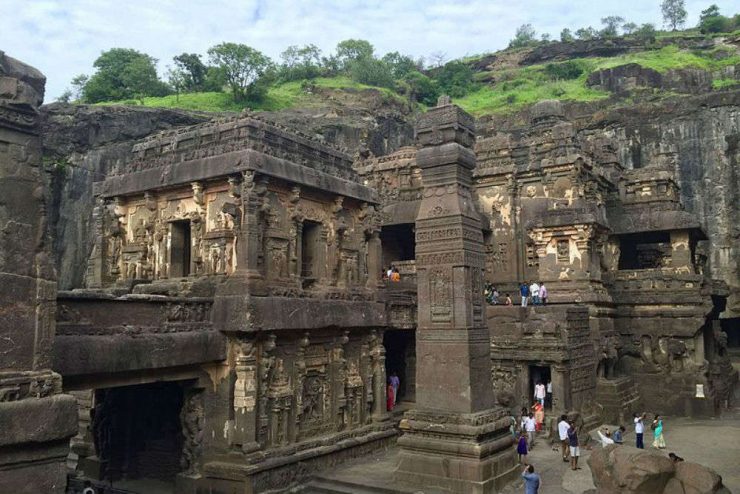 The Kailasa temple is one of the largest rock-cut ancient Hindu temples located in Ellora, Maharashtra, India. A megalith carved out of one single rock, it is considered one of the most remarkable cave temples in India because of its size, architecture and sculptural treatment.

The Kailasa temple (Cave 16) is one of the 34 cave temples and monasteries known collectively as the Ellora Caves. Its construction is generally attributed to the 8th century Rashtrakuta king Krishna I. The temple architecture shows traces of Pallava style.

The construction of the temple is often attributed to the Rashtrakuta king Krishna I (r. 756-773 CE), based on certain epigraphs that link the temple to Krishnaraja (IAST Ká¹›á¹£á¹‡arÄja). However, such identification is problematic, because these epigraphs are not physically connected to the caves, and do not date Krishnaraja’s reign.

The Baroda plates (c. 812-813 CE), issued around 40 years after the reign of Krishna I, mention Krishnaraja as the patron of Kailasanatha, and also mention a Shiva temple at Elapura (Ellora). These plates record the grant of a village by Karkaraja II, a ruler of a Rashtrakuta branch of Gujarat. According to these plates, the king constructed a temple so wonderous that even the gods and the architect were astonished. Most scholars believe that this is a reference to the Kailasa Shiva temple at Elora. However, the land grants issued by successors of Krishna I do not contain any such references.

Kailasa temple lacks a dedicatory inscription, but there is no doubt that it was commissioned by a Rashtrakuta ruler. Its construction is generally attributed to the Rashtrakuta king Krishna I (r. 756-773 CE), based on two epigraphs that link the temple to “Krishnaraja”:

However, the attribution of the temple to Krishna I is not completely certain because these epigraphs are not physically connected to the caves, and do not date Krishnaraja’s reign. Moreover, the land grants issued by Krishna’s successors do not contain any references to the Kailsa temple.

The Kailasa Temple is notable for its vertical excavation—carvers started at the top of the original rock, and excavated downward. The traditional methods were rigidly followed by the master architect which could not have been achieved by excavating from the front.

The temple shows traces of Pallava style. According to Hermann Kulke, the Chalukya king Vikramaditya II (r. 733–744 CE) took some Pallava artists back to his kingdom after defeating the Pallavas. The temples constructed by these artists influenced the Kailasa temple constructed at a later date.

The entrance to the temple courtyard features a low gopuram. Most of the deities at the left of the entrance are Shaivaite (followers of Lord Shiva) while on the right hand side the deities are Vaishnavaites (followers of Lord Vishnu). A two-storeyed gateway opens to reveal a U-shaped courtyard. The dimensions of the courtyard are 82 m x 46 m at the base. The courtyard is edged by a columned arcade three stories high. The arcades are punctuated by huge sculpted panels, and alcoves containing enormous sculptures of a variety of deities. Originally flying bridges of stone connected these galleries to central temple structures, but these have fallen.

Within the courtyard, there is a central shrine dedicated to Shiva, and an image of his mount Nandi (the sacred bull). The central shrine housing the lingam features a flat-roofed mandapa supported by 16 pillars, and a Dravidian shikhara. The shrine – complete with pillars, windows, inner and outer rooms, gathering halls, and an enormous stone lingam at its heart – is carved with niches, plasters, windows as well as images of deities, mithunas (erotic male and female figures) and other figures. As is traditional in Shiva temples, Nandi sits on a porch in front of the central temple. The Nandi mandapa and main Shiva temple are each about 7 metres high, and built on two storeys. The lower stories of the Nandi Mandapa are both solid structures, decorated with elaborate illustrative carvings. The base of the temple has been carved to suggest that elephants are holding the structure aloft. A rock bridge connects the Nandi Mandapa to the porch of the temple.

There are five detached shrines in the temple premises; three of these are dedicated to the river goddesses: Ganga, Yamuna and Saraswati.

There are two Dhwajasthambha (pillars with flagstaff) in the courtyard. A notable sculpture is that of the Ravana attempting to lift Mount Kailasa.