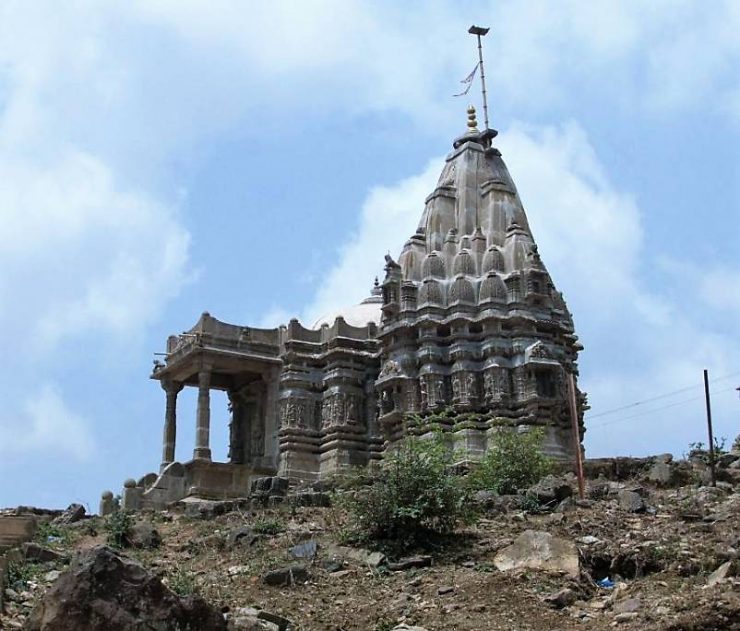 set at the top of the Pavagadh Hill, the Kalika Mata Temple is an amazing religious destination, where pilgrims visit from far and near. The temple overlooks the other-worldly scene that highlights the city of pre-Moghal Empire and offers great sights to explore. Kalika Mata Temple is located in Vadodara, India, and is situated 762 meters above the sea level.

Kalika Mata Temple complex has two sites where ground floor constitutes of Hindu shrines and the steeple is housed with a Muslim shrine. Kalika Mata Temple is one of the popular and biggest pilgrimage center in Gujarat which attracts the devotees in huge number and there is a tradition to make a pilgrimage to this temple at least once in a life time.

By the name, it indicates that the temple is made for goddess Kali. The temple is the oldest one in the area and dates from the 10th to 11th centuries. As the temple is located in India, where people blindly worship their gods, the temple receives hundreds and thousands of Hindu pilgrims year round. Hindu pilgrims are visiting this temple from past many years, even before the development of Champaner as a foremost city. To reach the summit and worship at the temple, you need to walk for five kilometers along the jungle footpath towards the top of the hill. Or else, to reach the summit a cable car is operated all the time that will pull you until the summit.

The cable car functions from the midway point and is the last place that could be accessible by road. The temple boasts huge fortifications as well as an open veranda that could be found in the front along with two different altars for sacrifices. Besides this, a chain of lights makes the place more beautiful that is used for special occasions. Inside the sanctum, the idol of Kalika Mata could be found with an only head called as the Mukhwato and is painted in red color. The temple also has full idols of Mahakali; own form of goddess Kali, as well as yantras of Bahuchara. While exploring this temple, you will be fascinated to see the views from the top. Watching down from the top, you will be amazed by the greenery around with smog all around.

The temple remains open from very early to quite late at night, as pilgrims from far and close visit the temple and worship the goddess, Kali. While traveling for long, people get exhausted and so they need a place to take rest and lie down. This need is fulfilled by the Machi Haveli. Machi Haveli is actually the rest house, which remains available for pilgrims. At the site, you will get everything, which was earlier not available whether it is the rest house, or a shop, or the facilities like a cable car. In fact, the route made to climb the top of the mountain was also not made properly, as it is available today.

This ancient temple is a great example of early architectures. So do not miss any area of this site, as all of great importance. You can reach this destination by road. From Vadodara, you can drive for 45 kilometers to reach Champaner. Take a bus or any private vehicle to reach your destination. Well, the best option to reach to this temple is by hiring a car from Vadodara to Champaner to Pavagadh. While driving all the way, the scenes around will fascinate you a lot.