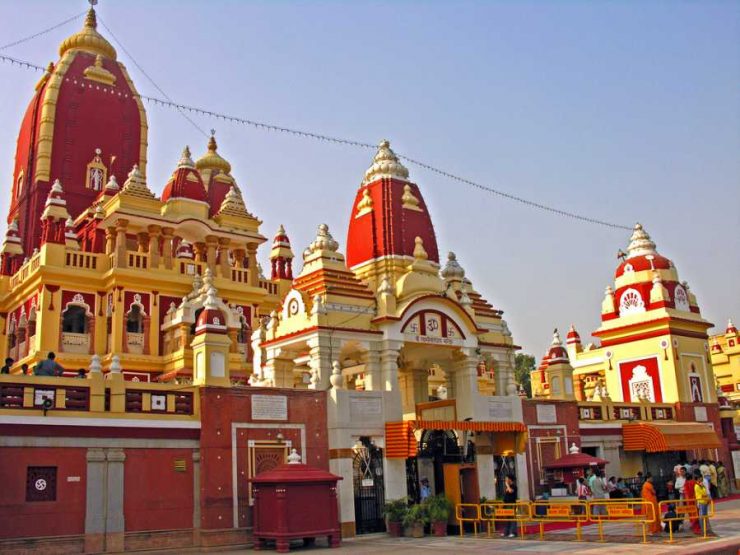 Kalkaji Mandir, also known as Kalkaji Temple, is a Hindu mandir or temple, dedicated to the Hindu Goddess Kali. This temple (mandir) is situated in the southern part of Delhi, India, in Kalkaji, a locality that has derived its name from the temple and is located opposite Nehru Place business centre. The temple is accessible by public transport on KalkajiMandir (Delhi Metro) and is near Bus Terminus-Nehru Place and Railway Station-Okhla. The general belief is that the image of the Goddess Kalka here is a self-manifested one, and that the shrine dates back to Satya Yuga when the Goddess Kalika had incarnated and killed the demon Raktabija along with other giant demons.

Aurangzebs royal order to destroy the original temple is available. The temple was rebuilt later by Marathas.

Though the temple is thought to be much older, the oldest portions of the present building are believed to have been constructed not earlier than the 1764 AD by the Marathas, with additions in 1816 by Mirza Raja Kidar Nath, the Peshkar of Akbar II During the second half of the twentieth century, a considerable number of Dharamshalas were constructed around the temple by Hindu bankers and merchants of Delhi. The temple itself is built on the land of Shamlat Thok Brahmins and Thok Jogians who are also the pujari’s of the temple and who perform Puja Sewa. The Thok Brahmins consist of Four Thullas, namely Thulla Tansukh, Thulla Rambaksh, Thulla Bahadur, and Thulla Jasram. they are classified into Gharbari Jogi and Kanphada Jogi

The temple is visited by worshippers all year round, but the culmination point of their prayers and celebration is during the twice-yearly festival of Navratri, a nine-day Hindu festival, in spring and autumn, during which a large fair is organised. Devotees gather and sing hymns and songs praising the Goddess Durga.

The major ritual consists of offering and bathing the idol (Mata Snanam) with milk followed by an aarti every morning (6 am) and evening (7.30 pm). This, in turn, is followed by hymn recitation. Offerings can be purchased just before the entrance of the temple. The Puja Archana and other rituals are performed turn by turn (Monthly Basis) by Pujaris consisting of more than 1,000 Nai families who are the descendants of four main clans (thules) of Brahmin pujaris and one clan of Jogis/Mahants.

The atmosphere around the temple is airy and bright with lights all night. Devotees also try to meditate there and a tantric aarti is held in the evening.