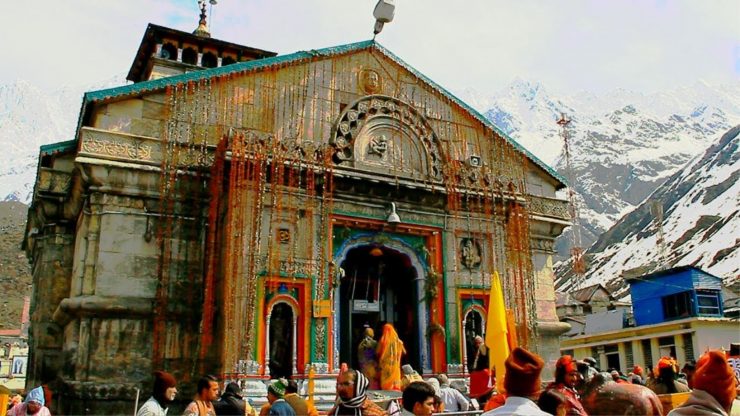 Kedarnath Mandir is dedicated to god Shiva. It is on the Garhwal Himalayan range near the Mandakini River in Kedarnath. Kedarnath is a Jyotirlinga temple and also forms part of the Chota Char Dham circuit. During the winters, the vigrahas (deities) from Kedarnath temple are brought to Ukhimath and worshiped there for six months. Lord Shiva is worshiped as Kedarnath, the ‘Lord of Kedar Khand’, the historical name of the region. The temple is at a height of 3,583 m (11,755 ft), 223 km from Rishikesh on the shores of Mandakini river. It is a tributary of Ganga and is an impressive stone edifice of unknown date. The structure is believed to have been constructed in the 8th century AD when Adi Shankara visited. The present structure is on a site adjacent to where Pandavas are believed to have built the temple. It has one Garbhagriha and a Mandapa and stands on a plateau surrounded by snow clad mountain and glaciers. In front of the temple, directly opposite to inner shrine, is a Nandi statue carved out of a rock.

The present Head priest or Raval of Kedarnath temple is Shri Vageesha Lingacharya. Shri Vageesh Ligaacharya belongs from the Village Banuvalli of Taluka Harihar of Davanagere district in Karnataka. During Pooja of Lord Shiva at Kedarnath, the mantras are pronounced in the Kannada language.

It is said that Pandavas was supposed to have pleased Shiva by doing penance in Kedarnath. The temple is one of the four major sites in India’s Chota Char Dham pilgrimage of Northern Himalayas. This temple is the highest among the 12 Jyotirlingas.

According to Hindu History, during the Mahabharata war, the Pandavas killed their relatives; to absolve themselves of this sin; the Pandavas undertook a pilgrimage. But Lord Vishweshwara was away in Kailasa in the Himalayas. On learning this, the Pandavas left Kashi. They reached the Himalayas via Haridwar. They saw Lord Shankara from a distance who tried to hide from them. Then Dharmaraj said: “Oh, Lord, You have hidden from our sight because we have sinned. But, we will seek You out somehow. Only after we take your Darshan would our sins be washed away. This place, where You have hidden will be known as Guptakashi and become a famous shrine.”

From Guptakashi (Rudraprayag), the Pandavas went ahead till they reached Gaurikund in the Himalayas valleys. They wandered there in search of Lord Shankara. While doing so, Nakul and Sahadev found a buffalo which was unique to look at.

On this hand part of Mahesha, a JyotirLinga appeared and Lord Shankara appeared from this light. By getting a Darshan of Lord Shankar, the Pandavas was absolved of their sins. The Lord told the Pandavas, “From now on, I will remain here as a triangular shaped JyotirLinga. By taking a Darshan of Kedarnath, devotees would attain piety”. A triangular shaped rock is worshiped in Garbhagriha of the temple. Surrounding Kedarnath, there are many symbols of the Pandavas. Raja Pandu died at Pandukeshwar. The tribals here perform a dance called, “Pandav Nritya”. The mountain top where the Pandavas went to Swarga is known as “Swargarohini”, which is located in Badrinath. When Darmaraja was leaving for Swarga, one of his fingers fell on the earth. At that place, Dharmaraj installed a Shiva Linga, which is the size of the thumb. To gain Mashisharupa, Shankara and Bheema fought with maces. Bheema was struck with remorse. He started to massage Lord Shankara’s body with ghee. In memory of this event, even today, this triangular Shiva JyotirLinga is massaged with ghee. Water and Bel leaves are used for worship.

When Nara-Narayan went to Badrika village and started the worship of Parthiva, Shiva appeared before them. Nara-Narayan wished that, for the welfare of the humanity, Shiva should remain there in his original form. Granting their wish, in the snow-clad Himalayas, in a place called Kedar, Mahesh himself stayed there as a Jyoti. Here, He is known as Kedareshwara.

The first hall inside Kedarnath Temple contains statues of the five Pandava brothers, Lord Krishna, Nandi, the vehicle of Shiva and Veerabhadra, one of the guards of Shiva. Statue of Draupadi and other deities are also installed in the main hall. A medium-size conical rough stone formation is worshiped in the Garbagruha and considered as Sadashiva form of Lord Shiva. An unusual feature of the temple is the head of a man carved in the triangular stone fascia. Such a head is seen carved in another temple nearby constructed on the site where the marriage of Shiva and Parvati was held. Adi Shankara was believed to have revived this temple, along with Badrinath and other temples of Uttarakhand; he is believed to have attained Mahasamadhi at Kedarnath. Behind the temple is the samādhi mandir of Adi Sankara. The head priest of the Kedarnath temple belongs to the Veerashaiva community from Karnataka. However, the Raval of Kedarnath temple does not perform the pujas. The pujas are carried out by Raval’s assistants on his instructions. He moves with the deity to Ukhimath during the winter season. There are five main priests for the temple, and they become head priests for one year by rotation.

By Road: From New Delhi bus station buses go to Haridwar almost every half an hour. Road takes 8 hours. Also, you can go by train, this will take 4-6 hours. And from there, the temple is not directly accessible by road and has to be reached by a 14 kilometers uphill trek from Gaurikund. Pony and manchan service are available to reach the structure. It is one of the 275 Paadal Petra Shiva Sthalangal, expounded in Tevaram.

Way to Kedarnath goes through Rishikesh, Devaprayag, Rudraprayag and ends in Gaurikund. If jeep goes fast it can reach Gaurikund in 9-10 hours. The road from Rishikesh to Gaurikund is closed after 8 o’clock in the evening. Himalayas start near Rishikesh (half an hour from Haridwar). All the road to Devaprayag goes near Ganga. In Devaprayag Bhagirathi (Ganga) and Alaknandu unite. One stops here and puts their legs into this holy water. After Devaprayag road goes alongside Alaknandu to Rudraprayag, were Mahaalaknandu and Mandakini Rivers unite. After Rudraprayag road goes alongside Mandakini.

By Air: The nearest airport from Kedarnath is the Jolly Grant Airport near Dehradun, about 239 km from Kedarnath. In fact this airport is closer to Rishikesh (approx. 16 km) and takes roughly 20-30 minutes to reach Rishikesh. From there you need to book a taxi or take a bus to reach Joshimath.