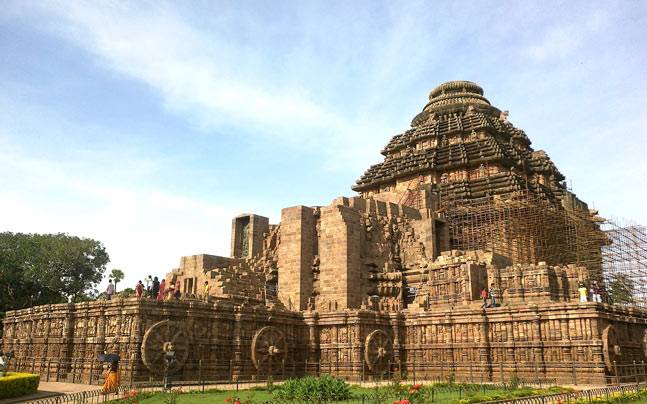 Konark Sun Temple is a 13th century Sun Temple at Konark in Odisha, India. It is believed that the temple was built by king Narasimha deva I of Eastern Ganga Dynasty around 1250 CE. The temple is in the shape of a gigantic chariot, having elaborately carved stone wheels, pillars and walls. A major part of the structure is now in ruins.

The temple is a UNESCO World Heritage Site and has also featured on various lists of Seven Wonders of India. The name ‘Konark derives from the combination of the Sanskrit words, Kona (corner or angle) and Arka (sun), in reference to the temple which was dedicated to the Sun God Surya.

The monument was also called the Black Pagoda'(Kaala Pagoda) by the European sailors. In contrast, the Jagannath Temple in Puri was called the White Pagoda. Both temples served as important landmarks for the sailors. The temple was originally built at the mouth of the river Chandrabhaga, but the waterline has receded since then.

The temple has been built in the form of a giant ornamented chariot of the Sun god, Surya. It has twelve pairs of elaborately carved stone wheels which are 3 meters wide and is pulled by a set of seven horses (4 on the right and 3 on the left). The temple follows the traditional style of Kalinga architecture. It is carefully oriented towards the east so that the first rays of sunrise strikes the principal entrance.

The temple is built from Khondalite rocks.  The original temple had a main sanctum sanctorum (vimana), which was supposedly 229 feet (70 m) tall. Due to the weight of the super structure (70m tall) and weak soil of the area the main vimana fell in 1837. The audience hall (Jagamohana), which is about 128 feet (30 m) tall, still stands and is the principal structure in the surviving ruins. Among the structures, which have survived to the current day, are the dance hall (Nata mandira) and dining hall (Bhoga mandapa).

The other one belongs to some unknown Vaishnava deity. Sculptures of Balarama, Varaha and Trivikrama have been found at the site, indicating it to be a Vaishnavite temple. Both temples have their primary idols missing. A collection of fallen sculptures can be viewed at the Konark Archaeological Museum which is maintained by the Archaeological Survey of India.