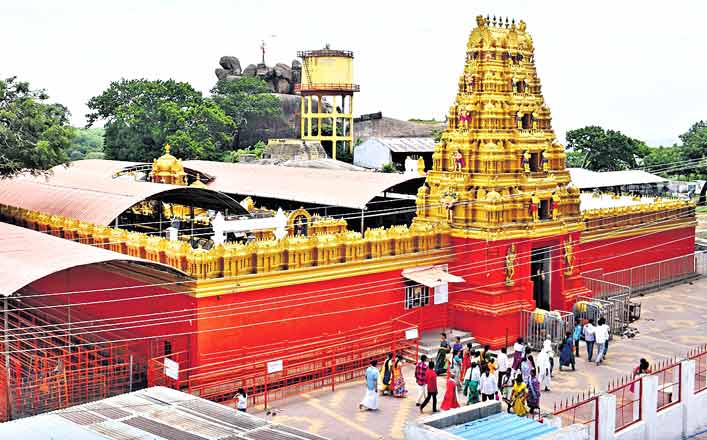 Contents hide
1 About Kondagattu Sri Anjaneya Swamy Temple
2 History
3 Importance/Significance
4 Facts/Mythology
5 Festivals/Events/Gatherings
6 How to reach
7 Share this:
8 Like this:
9 Related

Kondagattu Anjaneya Swamy Temple is one of the most celebrated temples of the Karimnagar District. Sri Anjaneya Swamy is the chief deity of this magnificent temple. It is situated in the hills of the Kondagattu villages. The temple is at a distance of 35 Kms from Karimnagar town. The temple is encapsulated by caverns and Rayuni fort, with bojja potana on its north. The temple is also home to myriad flora and fauna. The route to this temple from Karimnagar is truly breathtaking. The temple is situated amidst pleasant hills, valleys & water springs. Kondagattu is truly blessed by nature and is very scenic. The mighty fort of Kondalaraya & Bojjapotana caves are also nearby attractions for individuals to travel to.

According to many a local folklore, about roughly 300 years ago, a cowherd named Singam Sanjeevudu was letting his cattle graze. He realized eventually that some of his buffaloes were missing. He pranced around the hillock searching for it. After a while, the cowherd grew tired and decided to take a nap. Miraculously, Lord Anjaneya Swamy appeared in his dream and revealed to him the location of the buffaloes he was in pursuit of all this while. Sanjeeva got up all of a sudden and decided to tread the path directed by the lord in his dream. To his great surprise, upon looking around the hillock in the location pointed out by the lord, he stumbled upon an illuminating idol of Lord Anjaneya. He began build a shrine for Lord Anjaneya. It is that temple which is now known as Kondagattu Anjaneya Swamy temple. Its popularity eventually spread across the whole of Telangana.

It has been widely stated and the devotees upto this day believe in that couples who do not have good fortune of bearing children together have the opportunity of overruling their grievances. It is said that couples need to go through a religious process that involves offering 40 day prayers to Anjaneya Swamy. The temple continued its upward graph and became a trust by coming in to the custody of state endowment department in the year 1968.

Around 160 years ago, a person named Krishna Rao Deshmukh undertook the responsibility of renovating the temple and went a step further by endowing some land to it. The temple carries, besides the chief deity of Anjaneya Swamy, the idols of the great Lord Venkateswara, Goddess Alwaarula and Sri Laxmi.

The temple worships Lord Hanuman with great faith and has regular recitals of the Hanuman Chalisa. Several people flock to witness the pooja’s and aartis conducted in the premise for Lord Anjaneya Swamy. Festivals such as Makar Sankrant, Hanuman Jayanti, Ratha Saptami, Sri Ram Navami, etc are religiously followed. The temple begins its first aarti at 4 in the morning and concludes its day at 8 in the evening. The temple has a total of 45 Dharmashalas for the convenience of devotees. It also has road options via buses from Karimnagar, Jagtial and others.

Kondagattu is very close to both Jagtial and Karimnagar city in Karimnagar District of Andhra Pradesh. You have the options of reaching Kondagattu either by bus or in taxi/own car.

If you want to go to Kondagattu from Jagtial by road in your own transportation; near the Jagtial Cheruvu you get a Y-Junction, take the road which goes towards Karimnagar and you can see kondagattu village on your right after a journey of about 50 minutes.

If you are going from Karimnagar take the road towards Jagtial, via CSI Hospital and the District Court towards Jagtial. You can reach Kondagattu on your left after a distance of about 50 minutes.