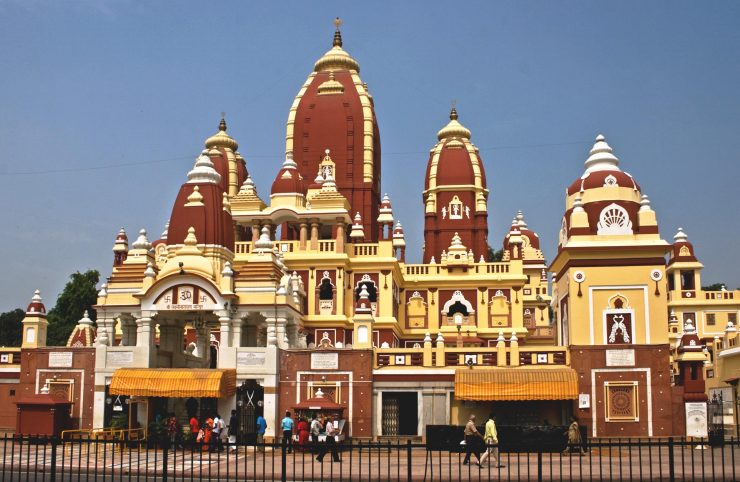 Contents hide
1 About Laxminarayan Temple:
2 History:
3 Architecture:
4 How to Reach:
5 Poojas and Festivals:
6 Share this:
7 Like this:
8 Related

The Laxminarayan Temple (also known as the Birla Mandir) is a Hindu temple dedicated to Laxminarayan in Delhi, India. Laxminarayan usually refers to Vishnu, Preserver in the Trimurti, also known as Narayan, when he is with his consort Lakshmi. The temple, inaugurated by Mahatma Gandhi, was made built by B. R. Birla and Vijay Tyagi from 1933 and 1939. The side temples are dedicated to Shiva, Krishna and Buddha.

The temple is spread over 7.5 acres, adorned with many shrines, fountains, and a large garden, and also houses Geeta Bhawan for discourses. The temple is one of the major attractions of Delhi and attracts thousands of devotees on the Hindu festivals of Janmashtami and Diwali.

The construction of temple dedicated to Laxmi Narayana started in 1933, built by industrialist and philanthropist, Baldeo Das Birlaand his son Jugal Kishore Birla of Birla family, thus, the temple is also known as Birla Temple. The foundation stone of temple was laid by Maharaj Udaybhanu Singh. The temple was built under guidance of Pandit Vishwanath Shastri. The concluding ceremony and Yagna was performed by Swami Keshwa Nandji. The famous temple is accredited to have been inaugurated by Mahatma Gandhi in 1939. At that time, Mahatma Gandhi kept a condition that the temple would not be restricted to the Hindus and people from every caste would be allowed inside.

This is the first of a series of temples built by the Birlas in many cities of India, which are also often called Birla Temple.

Its architect was Sris Chandra Chatterjee, a leading proponent of the ‘Modern Indian Architecture Movement’. The architecture was influenced heavily by the principles of the Swadeshi movement of the early twentieth century and the canonical texts used. The movement did not reject the incorporation of new construction ideas and technologies. Chatterjee extensively used modern materials in his buildings.

The three-storied temple is built in the northern or Nagara style of Hindu temple architecture. The entire temple is adorned with carvings depicting the scenes from Hindu theology. More than hundred skilled artisans from Benares, headed by Acharya Vishvanath Shastri, carved the icons of the temple. The highest shikhara of the temple above the sanctum sanctorum is about 160 feet high. The temple faces the east and is situated on a high plinth. The shrine is adorned with fresco paintings depicting his life and work. The icons of the temple are in marble brought from Jaipur. Kota stone from Makarana, Agra, Kota and Jaisalmer were used in the construction of the temple premises. The Geeta Bhawan to the north of the temple is dedicated to Lord Krishna. Artificial landscape and cascading waterfalls add to the beauty of the temple.

By Road: The temple is located on the Mandir Marg, situated west of the Connaught Place in New Delhi. The temple is easily accessible from the city by local buses, taxis and auto-rickshaws. Nearest Delhi Metro station is R.K.Ashram Marg, located about 2 km away. Also on the same road lies the New Delhi Kalibari.

By Rail: Closest Metro Station to Birla Mandir is Ramakrishna Ashram Marg. It is about a 2 km walk (20 minutes), in NDMC Area which is safe, clean and silent.

By Air: The Temple can be reached through nearest Indira Gandhi International Airport (14 km) which is well connected with regular domestic flights.

The main temple houses statues of Lord Narayan and Hindu Goddess Lakshmi. There are other small shrines dedicated to Lord Shiva, Lord Ganesha and Hanuman. There is also a shrine dedicated to Lord Buddha. The left side temple shikhar (dome) houses Devi Durga, the Hindu goddess of Shakti, the power. The temple is spread over an area of 7.5 acres (30,000 m2) approximately. And built up area is 0.52 acres (2,100 m2).

This temple Opening & Closing times is 4:30 AM – 1:30 PM and 2:30 – 9:00 PM. Birla Temple is dedicated to Lord Vishnu, the second of the Hindu Trinity of creator-preserver-destroyer, and his consort Lakshmi, the Goddess of wealth. Significant idols of Goddess Durga, Lord Shiva, Lord Ganesha, Lord Rama and Lord Hanuman also preside in the temple.

Janmashtami (birthday of Lord Krishna) is celebrated with full zest and fervor in the Birla Temple each year. Being famous for its celebration of the Hindu deity Krishna, hordes of devotees comes to visit this temple of spiritual legacy.