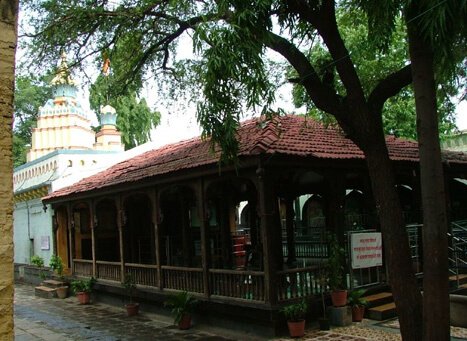 Ranjangaon is a village located at a distance of about 50 km from Pune, en route to Aurangabad in Maharashtra, and it houses a shrine to Mahaganapati.

Ranjangaoncha Mahaganapati is considered to be one of the Ashta Vinayak shrines of Maharashtra, celebrating eight instances of legends related to Ganesha.

The eight sacred temples are housed in a very determined sequence. Lord Ganesha, the elephant-headed god of wisdom, who is also considered as the God of Unity, Lord of obstacles, Prosperity, and learning.

Legend has it that a demon by name Tripurasura caused suffering to all beings in the heaven and on earth. On hearing the pleas of the Gods, Shiva intervened but he realized that he could not defeat the demon. Later on listening to Narad Muni’s advice, Shiva salutedGanesha and then shot a single arrow which destroyed the demon and Tripura citadels. Shiva, the slayer of the Tripura citadels is enshrined at Bhimashankaram nearby. In South India, the legend is commonly known as Ganesha broke the axle of Shiva’s chariot since Shiva headed to battle the demon Tripurasura without saluting Ganesha Upon realizing his act of negligence, Shiva saluted his son Ganesha and then proceeded to battle against the powerful demon and achieved the victory.

The main entrance of this Mahaganpati Mandir has a separate shrine for Shivalingam, the infinite nature of Lord Shiva. The Shikhara or Vimanam (tower above the sanctum sanctorum) contains the sculptures of all forms of Lord Ganesha in Ashtavinayaka temples. This temple contains the footwear of Shri Vengaonkar Josh, the great devotee of Lord Ganesha and the gateway of the temple has a bright lamp tower.