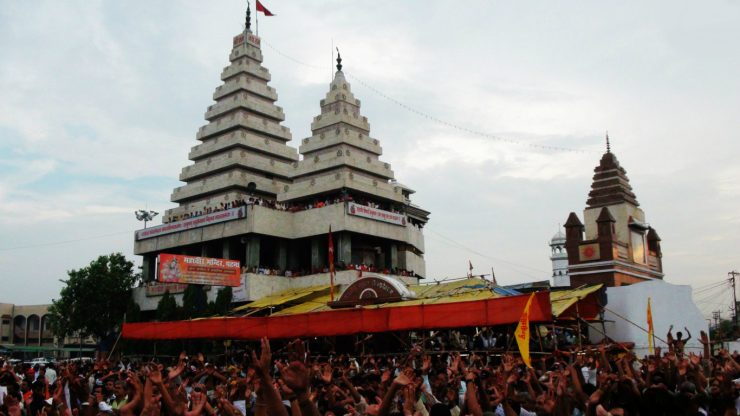 Contents hide
1 About Mahavir Mandir:
2 History:
3 Architecture:
4 Timings:
5 Festivals:
6 Special Rituals:
7 How to Reach:
8 Share this:
9 Like this:
10 Related

Mahavir Mandir Trusts is named Shri Mahavir Sthan Nyas Samiti and monitors working and development of temple. The Trusts also runs human welfare organization like Mahavir Cancer Institute & Research Centre, Mahavir Vaatsalya Hospital and Mahavir Arogya Hospital and several hospitals and orphanage in the agricultural and the rural state of Bihar. The trust has submitted its 2008-09 budget, which is of ₹35.13 crore. Floating stone has been brought in from famous ramsetu which never sinks in water. It is there for the public exhibition.

As per Patna High Court Judgement in 1948, the temple exists since time immemorial. But from the scrutiny of historical facts and traditions, it appears that this temple was originally established by swami Balanand, an ascetic of Ramanandi sect in around 1730A.D. The main temple has got two idols of Hanumanji one for i.e. for the protection of good people and another for i.e. for the elimination of the wicked persons. The temple belongs to Ramanand sect although from 1900 A.D. it had been in the possession of the Gosain Sanyasis till 1948 A.D. In 1948 A.D. it was declared a public temple by Patna High Court. A new, magnificent temple was reconstructed between 1983 and 1985 at the old site at the initiative of Kishore Kunal with devotees’ contribution and now it is one of the most magnificent temples in the country.

The entrance of the temple is situated further north. At the entrance, there is the facility for shoe keeping and inside the premises, towards the right is the facility of fresh water for cleaning purposes and ablutions. The temple, in fact, is not an isolated temple but a temple complex, having all the necessary facilities for the visitors and worshippers. Around the main area called Garbhagriha, there is the passage which houses Lord Shiva. The passage has a ritual significance for the lay worshippers, apart from the stairs which lead to the first floor, giving another round of holy delight.  The first floor itself constitutes four sanctums of the Deities. It has got the temple of Lord Rama, to begin with. The portrayal of Lord Krishna, delivering the sermon to Arjun, stands beside the Rama temple. Next to it, Goddess Durga is situated at the place. Next to this also, the human frame standing figure of Lord Shiva, meditating Mother Parvati and Nandi- the Holy ox are placed in the wooden palisade. In this wooden palisade, the Shiva Lingam has installed the site for the performance of Rudrabhisheka.

The floating Ram-setu Shila is also placed on this floor only. It has been kept in a glass container and is revered by the people. The volume of this stone is 13,000 mm while the weight is approx. 15kgs. The second floor is mainly used for ritual purposes. Sanskar mandap is located at this floor only. Chanting of mantras, japa, recitals of Holy Scriptures, Satyanarayan katha and various other rituals are practiced and performed here. The floor also has the pictographic representation of the scenes from the Ramayana.

On the first floor, while crossing Dhyanmandap, to the left are Lord Ganesha and Lord Buddha and further on, Lord Satyanarayan, Lord Rama accompanied by Mother Sita and Goddess Sarasvati seem to cast a benevolent look on the devotees. In front of this facade of deities, below the Peepal tree, is the temple of Shani-maharaj; the temple, designed in the style of cave architecture, looks beautiful. In the main campus, there are campus houses, the office, a shop selling ritual articles and a book shop selling the books of the religious genre. The campus also has one Astrological/Palmistry center and a Gem Stone center catering to the needs of devotees and providing guidance.

Long winding queues can be seen at the temple on Saturdays and Tuesdays, the traditional worshiping days of Lord Hanuman. Thousands of people visit Mahavir Mandir on every Ram Navami and New Year celebration. On every Ram Navami waiting queues grow up to some kilometer long.

Sri Rama Navami: The festival of Rama Navami is celebrated on the auspicious occasion of the birth of Lord Shri Ram. In the whole country after Hanumangarhi in Ayodhya Mahavir Mandir of Patna attracts the largest number of devotees on the Rama Navami day. On a single day, the number of the devotees varies from three to five lakhs.

Janaki-Navami: Janaki-navami is celebrated every year on the 9th day of the bright fortnight of the Vaishakh month on the occasion of the birth of Sita Mata. This year the Mahavir Mandir Trust is erecting the scene of ‘Sita-udbhava’ i.e. the coming up of Sita in the marvels. Statues of king Janak, his priest, minister, attendants and oxen with the plough will be established at Sita-madhi, opposite Sitamadhi Railway Station. The marble statues are being made at Jaipur at the cost of Rupees fifteen lakhs.

Hanuman-Jayanti: Hanuman-jayanti is celebrated in the Hanuman Mandir on the 14th day of the dark fortnight of the Kartika month. This day is recommended in the Vaishnava-matabja-bhaskara of Ramanandacharya as well as in the tradition of Hanuman-garhi, Ayodhya. On this day, eslaborate rituals are performed and the ‘dhvaja’(the holy flag) of the temple is also changed.

Shri Krishna-Janmastami: In Mahavir Mandir Janmashtami is celebrated with all religious devotion. Recitals from the Gita and Bhagwad are done in the temple. Devotees remain on fast till midnight. Before the birth of Lord Krishna, two hours continuous Bhajan both in Sanskrit and Hindi is carried out and then at midnight his birth is celebrated with Arati and Prasad is distributed amongst the devotees.

Durga-Puja: During Durga Puja Durga Saptasati is recited from the beginning to the end with samput path for nine days. Statue of the Goddess is established on the campus and thousands of devotees have a darshan every day and on the last three days of the Navratri there is a vast gathering of the devotees in the temple.

Vivah-Panchami: Vivah Panchami is the festival of the marriage of Lord Ram and Sita. It is celebrated in this temple with all devotion and gaity. Mahavir Mandir is having the most impressive idols of Ram and Sita on the eve of their marriage. In Vivah Panchami, many traditional glimpse party from Mithila come and perform on the dais for two days showing the marriage celebration.

Sanskrit-Divas: Sanskrit Diwas is observed every year on the Shrawani Purnima day. Students participate in a big way. They write essays in Sanskrit and make eloquent Sanskrit speeches. In the evening, there is a conference held in which many distinguished scholars participate and enlighten the audience by their Sanskrit speeches.

Tulasi-Jayanti: Tulsi Jayanti is celebrated on the 7th day of the bright fortnight of Shrawan month. Scholars of Mahavir Mandir have conclusively written that Tulsidasji was born on this day in 1554 Sambat and he was a celebrated saint throughout his career. The name of Ratnawali and his marriage was a development of two centuries after his departure. In the evening, many scholars give lectures in which various aspects of the career of Tulsidas are highlighted.

Gita-Jayanti: Geeta Jayanti is celebrated on the 11th day of the bright fortnight of Agrahan month. On this day, the Mahabharat war had started and Lord Krishna had given the sermon to Arjun to fight against the evil committed by any person irrespective of close relations. Gita is one of the most celebrated scriptures in the world and on this day many functions are held in this connection.

Ravidas-Jayanti: Ravidas Jayanti is celebrated on the Magh Purnima day. Mahavir Mandir has got the most impressive idol of Sant Ravidas which is established on the northeast corner of the temple. It has got equally impressive Chhatri (canopy). Processions are held on this occasion and various aspects of his life are highlighted in the evening function.

Another specialty of the temple is the prasadam, offered to the presiding deities thereon. The prasadam offered is “Naivedyam” which is prepared by the experts from Tirupati, Andhra Pradesh and is a delicacy.

The Naivedyam of Mahavir Mandir is a synonym of the laddoos which are offered to Hanumanji. Naivedyam in the Sanskrit language means an offering of eatables presented to a deity or idol. It is prepared by the experts from Tirupati. It contains besan of a gram, sugar, cashew, raisin, Green cardamoms, Kashmiri-saffron and other flavorings, cooked in ghee and molded into a ball shape. The kesar (saffron) use in the naivedyam is obtained directly from the grower at Pampore district, well known as “Land of Gold (Saffron) in Kashmir.

The temple is easily reachable from all part of the city by autos, bus, and private vehicle. However, besides on the very busy area, parking for the vehicle can be a problem. However, the station parking area can be used for the same.

Mahavir mandir is located just near to Patna Junction at a distance of 200 m.