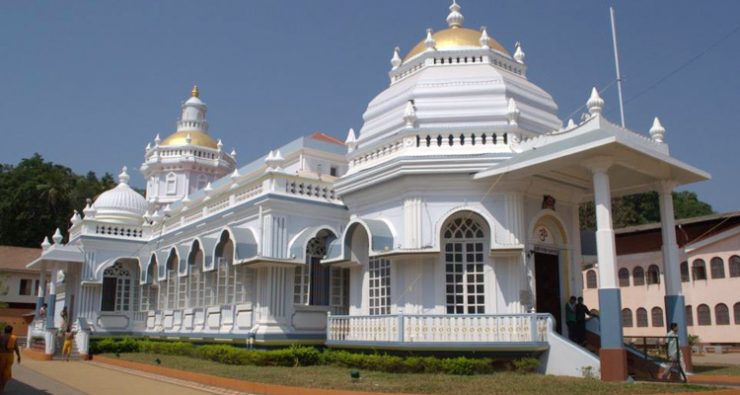 Shri Mangeshi temple is located at Mangeshi Village in Priol, Ponda taluk, Goa. This temple is one of the largest and most frequently visited temples in Goa. In 2011, the temple and the people there have decided a dress code for the visitors. Dedicated to Bhagavan Mangesh, incarnation of Lord Shiva, the temple reflects typical Goan style of architecture.

Stories and legends passed down from generations explain a story. They say, once Lord Shiva while playing dice with Goddess Parvati was continuously losing. Frustrated, he went into the forest. Goddess Parvati was afraid and went behind him. She came face to face with a huge tiger.She was terrified and cried out, “Trahi Mam girisha!” (Oh Lord of Mountains, save me!). Shiva then turned back into his normal form from the tiger’s form. The words “mam girisha” over time got abbreviated to Manguirisha .

This temple had its origins in a village named Kushasthali Cortalim and since the time of the shifting, the temple has been rebuilt and renovated twice. In 1890 and then 1973 also the temple was renovated. The original site was a very simple structure, and the current structure was only built under Maratha rule.

Shrines of GoddessParvati and God Ganesha are also built here.. The subsidiary shrines to the rear of the main building house house Devtas like Mulakeshwsar, Virabhadra,  Saanteri,  Lakshminarayana, Suryanarayan, Garuda and Kala Bhairav.

A beautiful lamp tower is the cherry on the cake and adds to the beauty of the temple. It is extremely eye pleasing. The main annual festival of this Temple falls on the day of “Magh Pournima” in February . Navaratri and Shivaratri are observed grandly with Makharotsava. And during the time of March the festivals of Holi or Shigmo take place here which also attract crowds.