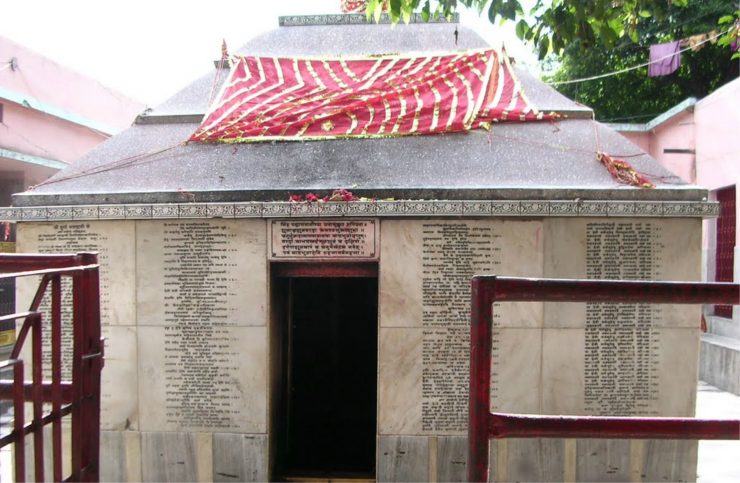 The Mangla Gauri Temple in Gaya, Bihar, India has been mentioned in Padma Purana, Vayu Purana and Agni Purana and in other scriptures and tantric works. This temple is among the eighteen maha shakti Peeth. The present temple dates back to 15th century. The shrine is dedicated to Shakti or the mother Goddess in the predominantly Vaishnavite pilgrimage center of Gaya. Mangalagauri is worshiped as the Goddess of benevolence. This temple constitutes an Upa-Shakti Pitha — where it is believed that a part of the body of Shakti fell according to mythology. Here Shakti is worshiped in the form of a breast, a symbol of nourishment. It is believed that whoever comes to maa Durga with his wishes and prayers, returns successfully with all of prayers and wishes come true.

It is a very old temple built in the 15th century. We have to climb up a small hillock to reach the temple. The steps route is in between houses of local people. At the starting of steps route, there is the temple of Bhima (One of Five Pandavas). We can see his knee impression here. Here Bhima did Shraddhakarma, hence called as Bhimvedi Gaya.

According to various myths and traditions, there are 51 pieces of Sati’s body scattered across the Indian subcontinent. These places are called shakti peethas and are dedicated to various powerful goddesses. The body was separated part by part. Shiva passed through this place on his way back to Kailash with the dead body of Sati whose breast fell at this spot where the modern temple of Mangla Gauri stands.

The temple is facing east and is built on top of the Mangalagauri hill. A flight of steps and a motorable road lead to it. The sanctum houses the symbol of the Goddess and it has some finely carved ancient relief sculptures. A small hall or mandap stands in front of the temple. The courtyard houses a fire pit for the home.

There are two minor shrines dedicated to Shiva and images of Mahishasura Mardini, Durga and Dakshina Kali.

The temple complex encompasses of temples of Maa Kali, Lord Ganesha, Lord Hanuman and Lord Shiva. After climbing 200 steps, one reaches Mangla Gouri temple campus. There are several temples in that campus. A Bilwa tree is also present in the temple.

One can do pradakshina to the temple. In the backside of the temple, adjacent to temple wall there is a sacred place where Sati Devi’s sthana fell. The main temple is a very small temple and only 2 to 3 members can go into the temple at a time. There is no idol in the temple. We can see Breast of Satidevi in deepa lighting. Lord Shiva is also present in the form of Shivaling beside maa. Some Tantriks offer Bali to Mother Goddess.

GT Road connects Gaya to the northern cities of India. Buses, taxis and other local transport facilities are available to reach the temple.

The nearest railhead is the Gaya Junction at a distance of 3 km from the temple.

The nearest airport is the Gaya Airport at a distance of 6 km from the temple.