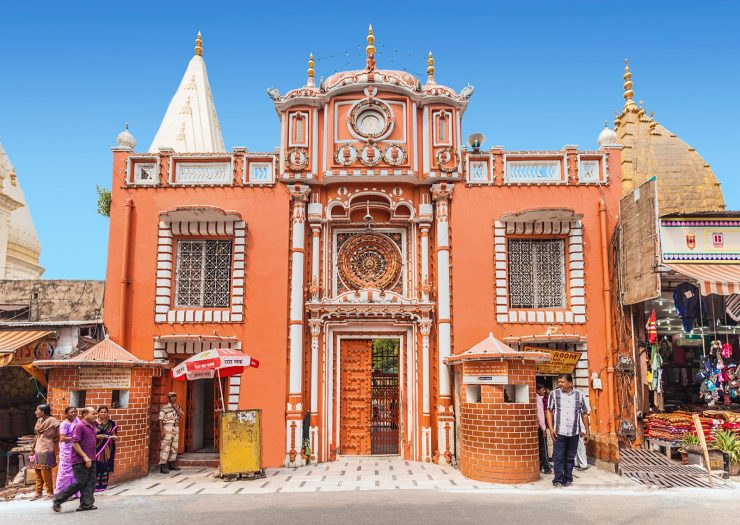 Raghunath Temple consists of a complex of seven Hindu shrines, each with its own Shikhara. It is one of the largest temple complexes of north India. It is located in Jammu in the Indian state of Jammu and Kashmir. The temple was built during the period 1822–1860 by Maharaja Gulab Singh and his son Maharaja Ranbir Singh of the Jamwal Rajput clan. The temple has many gods in its complex of shrines, but the presiding deity is Rama, an Avatar of Vishnu. The Mughal architectural influence is seen in all the spiral shaped towers which have gold plated spires, except the tower over the main shrine which is said to be in Sikh architectural style. The niches in the walls of the shrines are decorated with 300 well-crafted images of deities. The paintings in the 15 panels of the main shrine are based on themes from Ramayana, Mahabharata, and Bhagavad Gita. 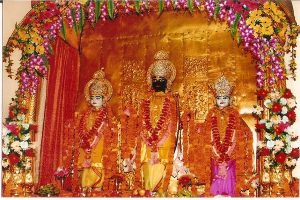 The temple was also in the news during 2002 when suicide bombers Fidayeen of the Lashkar-e-Toiba attacked it twice with grenades and indulged in indiscriminate firing which resulted in a death of many devotees and also in injuries to many people. 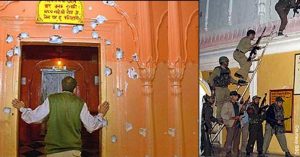 The temple complex is located at Sui 18 kilometres (11 mi), west of Jammu city in Jammu and Kashmir. The city is well connected by road, rail and air services. The National Highway 1 A passes through Jammu and connects with all parts of the country. The National Highway 1B is entirely within the state. Jammu city has a railway station called Jammu Tawi, on the northern railway line that is well connected with major cities of India. Express trains operate from this station to Delhi, Mumbai, Chennai, Kolkata and Amritsar. Jammu Airport operates flights to many cities in India such as Delhi, Leh and Srinagar.

During the reign of the rulers of Jammu Shivaliks, after 1765, there was a spurt in temple building activity in Jammu area, which continued during the early period of the 19th century. The rulers built spiral shaped temples with brick and crowned each tower with bright Kalashas in the shape of shikhara (rising tower). One such temple complex was started in 1822 (1835 is also mentioned [3]) by Gulab Singh, the ruler of Jammu and was dedicated to his guru Baba Prem Das. Its construction was completed in 1860 by his son Maharaja Ranbir Singh. However, according to an inscription in Brahmic script (Takri) at the entrance of the temple, Gulab Singh and his brother Dhyan Singh are credited with building the temple in 1827 in honour of Mahant Jagannath.

The Hindu temple complex, one of the largest in North India, which has seven shrines, is built on a raised platform of 5 feet (1.5 m) height in an octagonal shape. The front fascia is 40 feet (12 m) in width while the main shrine is set 50 feet (15 m) away from the entrance. Within the enclosed space of the yard, there are residential buildings and open cattle yards on its eastern and northern directions. The front fascia of the temple has three entry doors. The main shrine which is 20 feet (6.1 m)x20 feet (6.1 m) in size, is surrounded by a circumambulation passage (pradakshina path) of 10 feet (3.0 m) width. The entrance door, set on one side of this octagonal chamber of the shrine, faces east. The interior of the inner chamber is gold plated. The main walls of the outer chamber have 15 panels, each of 9 feet (2.7 m) height. These interior panels have a surfeit of paintings of the Jammu School of painting consisting of images from the Hindu epics Ramayana, Mahabharata, and Bhagavad Gita, represented by gods such as Ganesha, Krishna, Sheshashayi Vishnu (reclining Vishnu) and also a large painting depicting the Sita Swayamvara scene (Sita choosing her husband from an elite gathering of princesses). Apart from the mythology related themes, some paintings relate to secular aspects, like Kabir, a saint, engaged in weaving and army personnel of Dogra and Sikh communities. The paintings also reveal the type of attire and the weaponry prevalent during the period of temple building. In the main shrine, the idol of Lord Rama, which is the family deity of the then king and the Dogra people, is deified in the garbhagriha (sanctum sanctorum). The shrine has a dome instead of the normal shikhara in a pyramidal shape, which is in the Sikh architectural style. All the seven shrines have gold plated spires. Gods and Goddesses enshrined in the seven shrines are all related to the epic Ramayana. In one of the shrines, there is a Shiva linga, which is carved out of black stone and measures 7.5 feet (2.3 m). The shrines are also enshrined with a very large number of Saligramas (fossil ammonite stones specially obtained from the Gandaki river, in Nepal – a Vaishnava (Hindu) an iconic representation of Vishnu). The architectural features of the shrines are stated to be largely influenced by Mughal architecture. 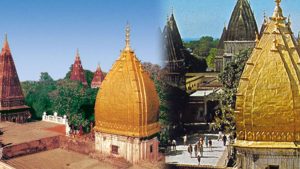 A distinct feature noted in the entire temple complex is the stucco style embellishments built with brick masonry and finished with plaster. The motifs crafted are of floral (lotuses) and geometric designs, on the walls, in the niches and on arches. Apart from paintings on the walls, the niches in the interior parts of the shrines have 300 well-crafted images of deities. The profusion of paintings and images on the internal and external faces of the temple was considered an auspicious feature, instead of leaving the wall surfaces blank. However, the images and murals on the outer walls of the temple have since been demolished.

By Air : 8 Kms from Jammu Airport