The temple of Ramnathi is located in Ramnathim, Bandivade in Goa. This temple belongs to the Saraswat Brahmins (belonging to Kavale mutt & Kashi Mutt) and Daivadnya Brahmins. Similar to other Goan Brahmin temples, Ramnathi too incorporates the system of Panchayasthan, therefore this temple house 5 main deities namely – Shri Ramanath (chief deity), Shanteri, Kamakshi, Laxmi Narayan, Ganapati, Betal and Kalbhairav, along with other family purushas. 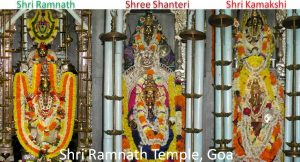 Shri Ramanath Deity was originally installed 3000 years B.C by Rama at Rameshwar. When Rama came back from Lanka along with Sita, after killing Ravana, he decided to pray to Shiva in order to absolve him of killing a Brahmin. Hence a Shivlinga was installed and Rama prayed to it. Lord Shiva came and sent Rama to Guru Gorakshnath. There are 12 Panths and One of the Panth started from Rama. This came to be known as Ramanath.

The original temple of Ramnathi in Goa, was located in Loutolim in salcette , Goa. The Idol of Ramnathi was shifted to the present site in the 16th century to prevent its destruction by the then Portuguese authorities. In May 2011, the Ramnathi temple completed 450 years at its present location. 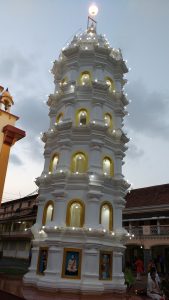 The chief deity of the temple is Ramnath. Since Ramnath is the chief deity, the temple came to be known as Ramnathi. The name Ram-Nath equals Lord of Rama i.e. Shiva. In addition the temple has the idols of the Goddess Shanteri(Shantadurga) from Rivona and the Goddess Kamakshi from Loutolim. There is an idol of Shree Lakshmi Narayan Shree Siddhinath (Ganesh), Shree Betal and Shree Kaalbhairav. This completes the Ramnathi Panchayatna.

The kulavis or associated families had migrated out of Salsette due to religious persecution and now dwell all along the western coast of India. A large number of the kulavis live in Mumbai, South Canara, Kerala and abroad. The tradition of coming to the temple after a major family event continues.