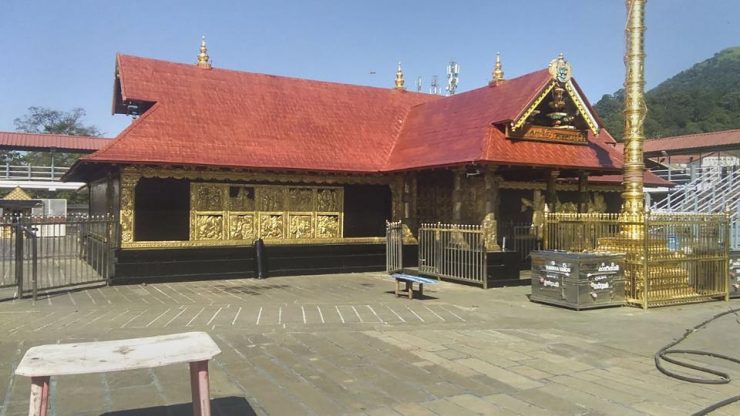 Sabarimala  is a Hindu pilgrimage centre located at the Periyar Tiger Reserve in the Western Ghat mountain ranges of Pathanamthitta District, Perunad grama panchayat in Kerala. It is one of the largest annual pilgrimages in the world, with an estimated over 100 million devotees visiting every year. Sabarimala is believed to be the place where the Hindu god Ayyappan meditated after killing the powerful demoness Mahishi.

Ayyappan’s temple is situated amidst 18 hills. The temple is situated on a hilltop at an altitude of 468 m (1,535 ft.) above mean sea level, and is surrounded by mountains and dense forests. The dense forest, (Periyar Tiger Reserve), around the temple is known as Poomkavanam. Temples exist in each of the hills surrounding Sabarimala. While functional and intact temples exist at many places in the surrounding areas like Nilackal, Kalaketi, and Karimala, remnants of old temples survive to this day on remaining hills.

Sabarimala is linked to Hindu pilgrimage, predominantly for men of all ages. Sabarimala pilgrims can be identified easily, as they wear black or blue dress. They do not shave until the completion of the pilgrimage, and smear Vibhuti or sandal paste on their forehead. Females who menstruate (usually between the ages of approximately 12 and 50) are not allowed to enter the temple, since the story attributed to Ayyappa prohibits the entry of the women in the menstrual age group. This is because Ayyappan is a Bramhachari (celibate).

The temple is open for worship only during the days of Mandalapooja (approximately 15 November to 26 December), Makaravilakku or “Makar Sankranti” (14 January) and Maha Vishuva Sankranti (14 April), and the first five days of each Malayalam month. The devotees are expected to follow a Vratham (41-day fasting) prior to the pilgrimage. This begins with wearing of a special Mala (a chain made of Rudraksha or Tulasi beads).

In general from then they are to refrain from non-vegetarian food of any kind (except dairy) alcohol, and tobacco, engaging in sex, using foul language, hair-cut, shaving and even trimming the nails. They are expected to bath twice in a day and visit the local temples regularly and only wear plain black or blue colored traditional clothing. Saffron colored dresses are worn by Sanysis (monks) who have renunciated material life. But, many devotees still continue to wear saffron colored clothes which become a part of vedic culture which connects the whole Hindus worldwide.

Hundreds of devotees still follow the traditional mountainous forest path (approximately 61 km) from Erumely, 12.8 km from Vandiperiyar and 8 km from Chalakayam, believed to be taken by Ayyappa himself. The Erumely route starts from Erumely to Aludha River, then crosses the Aludha mountain to reach Karivilam thodu. Now comes the sacred Karimala crossing, from there to Cheriyanavattom, Valliyanavattom and finally Pamba River. Then they have to climb Neelimala and enter into the ganesh bettam, shreerama betta padam.

Then comes the Aranmula kottaram, which is one of the stops of holy journey ‘thiruvabharana ghoshayatra’. These days people use vehicles to reach the Pamba River by an alternate road. From Pamba, all the pilgrims begin trekking the steep mountain path of Neeli Mala till Sabari Mala. This route is now highly developed, with emergency shops and medical aid by the sides, and supporting aid is provided to the pilgrims while climbing the steep slope, which used to be a mere trail through dense jungle. The elderly pilgrims are lifted by men on bamboo chairs till the top, on being paid.