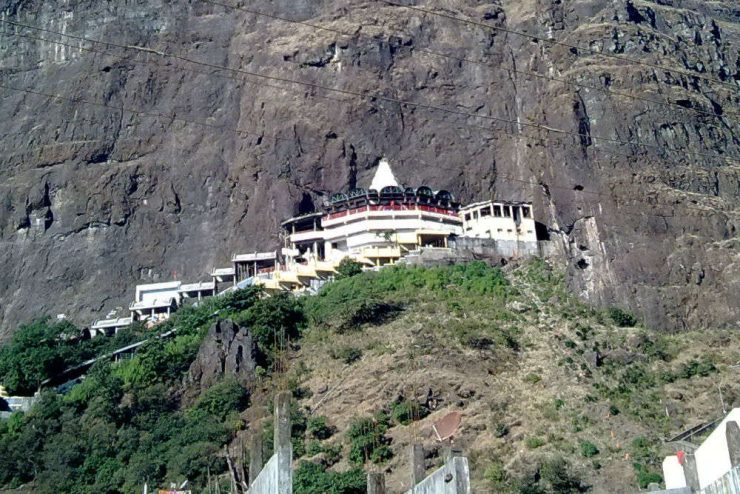 Saptashrungi  is a site of Hindu pilgrimage situated 60 kilometres (37 mi) from Nashik in west Indian state of Maharashtra in India. According to Hindu traditions, the goddess Saptashrungi Nivasini dwells within the seven mountain peaks. (Sapta means seven and shrung means peaks.) It is located in Nanduri, Kalwan taluka, a small village near Nashik in India. Devotees visit this place in large numbers every day.

Saptashrungi is a hill range consisting of seven hills locally called Ghads and form part of the Sahyadri Range of hills in Western Ghats. Sahyadri Range is also known as Ajanta Satmala Range and the average height of the peaks is 4,500 feet (1,400 m). The Dhodap, in the center of this mountain range, is the highest peak with an elevation of 4,600 feet (1,400 m), and Saptasrungi is towards its west.

There are 108 water bodies (ponds) located in the watershed of these hills, which are called Kundas. Nanduri and Vani are the villages nearest to the temple, which are situated at the foot of the hills. There are many approaches to reach the top of the temple location. The route from Nashik and Vani via Dindori is 39 kilometres (24 mi) and via Pimpalgaon Baswant is 51 kilometres (32 mi). The route via Nadurgaon village is the easiest and is 14 kilometres (8.7 mi) from Vani. It is at a distance of 60 kilometres (37 mi) from Nashik, the district headquarters. The State Highway 17 (Maharashtra) (SH-17) connected with the National Highway 3 (NH 3) links Nashik with the temple site near the villages of Vani and Nanduri. Bus facilities by state transportation are available to reach the temple precincts. The forests in the hills are reported to have medicinal herbs.

There is a circumlocutory path used by pilgrims to do parikrama around the temple. This path is in an elevation range between 1,230 metres (4,040 ft.) and 1,350 metres (4,430 ft.), and is stated to be in steep rock topography. The hills are covered with verdant forests. Three and a half Shakti Peethas (prominent seats of the Hindu Goddess) are reported in Maharashtra. These four Goddess temples are Mahalakshmi Temple at Kolhapur, Tulja Bhavani Temple at Tuljapur, Renuka Temple at Mahur (Matripur) and the Sapatashrungi Temple of Vani.

These four temples are also interpreted to represent the four parts of holy AUM, A kara, U kara, Makara and Mmm kara (Ardha matra). Though which of these is a ardha-peetha (a half Shakti Peetha, considered lower in importance to a complete Shakti Peetha) is disputed, Saptashrungi is generally regarded to be a half Shakti  Peetha.  However, the official site of the temple declares it as a complete Shakti Peetha. The three presiding deities of the Goddess-oriented scripture Devi Mahatmya in the Saptashrungi are considered a combined manifestation of the three goddesses which are equated with Mahalakshmi of Kolhapur, Mahasaraswati of Tuljapur and Mahakali of Mahur.

The goddess is reported to have appeared from the kamandalu (water-pot) of the creator-god Brahma.  The Goddess had taken the form of Durga (the Mahalakshmi of Devi Mahatmaya) and slew the buffalo-demon Mahishasura, who troubled the universe. After that the Goddess is believed to be settled here. As the Goddess took form here and resided at Saptashrungi, it is considered the original location of the Goddess.

This temple is one among the 51 Shakti peethas located on the Indian subcontinent and is a location where one of Sati’s limbs, her right arm is considered to have fallen when grief-stricken and agitated Shiva was carrying her dead body round the world on his shoulders, and Vishnu had cut her body into pieces with his Sudarshana Chakra. The story behind this event is that King Prajapati Daksha, father of Sati (the first wife of Lord Shiva), was performing a yagna (yagna is defined as a Hindu fire ritual sacrifice when deities of the Vedi ctimes like Agni, the fire god, and others were invoked by offering oblations such as ghee (clarified butter), milk, grains and so forth) called as Brihaspatirao. Sati (also called Shakti) who was Lord Shiva’s wife, attended the function without invitation.

Daksha who was not fond of his son-in-law, as he considered him a mendicant, purposely did not invite him for the yagna, while he invited all other gods. Sati felt deeply insulted by the slight shown by her father towards her.  Husband whom she had married out of deep love. Even then she decided to attend the yagna uninvited by her own father. When she went there, her father compounded the insult by totally ignoring her presence and vilifying Shiva. Sati felt deeply humiliated and hurt, and then in frustration she jumped into the yagna fire and committed suicide. When this news was conveyed to Shiva, first he sent his assistant to the site to enquire and take revenge.

Shiva also came to the yagna site and created a furor. In a state of grief and anger he put Sati’s dead body on his shoulders and started wandering round the universe. Looking at this grave situation, Brahma and Vishnu decided to intervene and bring back Shiva to his normal self. It was then decided that Vishnu will follow behind Shiva, and with his Sudarsha Chakra cut Sati’s dead body into pieces. Thus Vishnu cut her into 51 pieces (108 pieces are also mentioned in many Puranic texts  as Shiva travelled around the world and these fifty one body parts of Sati fell at different locations in the subcontinent, and all these places came to be known as Shakthi Peethas (abode of goddess Shakthi or Durga). Her right arm fell on the Saptashrungi hills and the place became holy, and a Shakthi Peeth came to be established here. It is also said that when the demon king Mahishasura was creating havoc in the forests, the devatas and people urged Durga to kill the demon. Then the 18 armed Saptashrungi Devi took the form of Durga and slayed Mahishasura, and since then she is also known as Mahishasura Mardhini.

Mahishasura was in the form of a buffalo. At the foot of the hill, from where one starts climbing the steps, there is the head of a buffalo, made in stone, which is believed to be of demon Mahishasura.  In the epic Ramayana war, when Lakshmana was lying unconscious in the war field, Hanuman came to Saptashrungi hills in search of medicinal herbs to restore his life. Saptashrung mountain was a part of the forest called Dandakaranya mentioned in the Ramayana. It is mentioned that Lord Rama, along with Seeta, and Lakshmana had come to these hills to pray to the goddess and seek her blessings.  In the hill of Markandeye, named after Sage Markandeya, there is a cave which is said to have been the abode of the sage.

This hill is located to the east of Saptashringi and a deep ravine divides the two hills. While staying in this cave, Markandeya is believed to have recited puranas (Hindu scriptures) to entertain the Devi.  Another local myth is that a tiger resides in the garbagriaha (sanctum sanctorum) every night and a keeps a watch on the temple but goes away before sunrise. Yet another myth is that when a person was trying to destroy a beehive, the Devi appeared before him to prevent the act. There are many other recent narratives extolling the divinity of the goddess, which are also linked to Shirdi Sai Baba and his devotees. In one such narration, a priest of Vani village known as Kakaji Vaidya who was working in the Saptashrungi Temple was quite disturbed by the miseries of life around him and he, therefore, appealed to the goddess to give him peace of mind and relieve him from all worries. Pleased with the priest’s devotion to her, the goddess appeared to him in a dream and told him to go to the Baba to set his mind at rest and in peace. As the priest was then not aware of which Baba she meant, he thought it was the Shiva at Trimabakeshwar temple and so he went there and offered worship to Shiva and stayed there for a few days.

In the process, he still did not get the feeling of peace and his restless mood continued. He came back to Vani village disheartened. Then, every day after taking bath in the morning he offered prayers to Shiva Linga by reciting Rudra mantra from the Yajurveda, for many days. He still did not get peace of mind. He then went back to the Mata temple and appealed to her to give relief to his restless mind. That night she appeared in his dream and told that the Baba she meant was Sai Samarth of Shirdi and that he should go there. The priest did not know the whereabouts of Sai Baba. Sai Baba through his divine psychic perception realised the need of the priest and so he sent his most loving devotee Madhavarao to meet the priest and bring him to his presence. Coincidentally, Madhavrao had also gone there at the advice of Baba to also offer two silver breasts to the goddess as his mother had forgotten to fulfill her vow of gifting the silver breasts to the goddess.

When Madhavarao went to Vani village the priest met him and came to know that he had come from Shirdi to offer silver breast to the goddess. The priest was very pleased, and also for the first time felt peace of mind. He then took Madhavarao to the temple where the silver breasts were placed at the feet of the goddess in the sanctum as a fulfilment of his mother’s vow. The priest then came to Shirdi with Madhavarao and had darshan of the Sai Baba and stayed there for 12 days and felt very peaceful. He then returned to Vani.