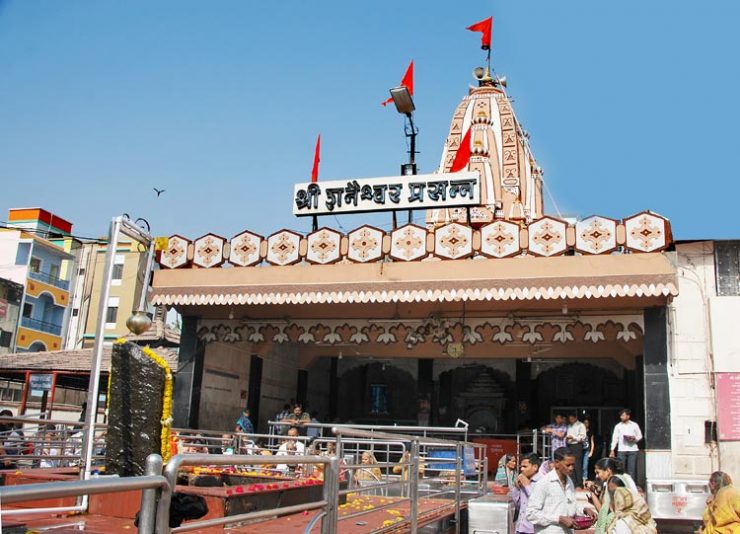 Shani Shingnapur  is a village in the Indian state of Maharashtra. Situated in Nevasa taluka in Ahmednagar district, the village is known for its popular temple of Shani, the Hindu god associated with the planet (graha) Saturn.

Shani Shingnapur, apart from the fact that it is home to the temple of Lord Shani, there is a striking feature that is, no one within the area of 1 km has lock on their door.They believe that Lord Shani safeguards their property. What is more, the post office is without a door! 2 or 3 thefts were reported in this area. But still some villagers never keep their valuables under lock and key. The temple is believed to be a “jagrut devasthan” (lit. “Alive temple”), meaning that a deity still resides in the temple idol. They believe that god Shani punishes anyone attempting theft.A swayambhu deity, it is revered by all. There are instances where the person attempting theft has died by vomiting blood and many have suffered from long term problems.

The story of the swayambhu statue handed down from generations through word of mouth, goes something like this: One day a shepherd was wandering and he saw a stone. He poked the stone and to his astonishment, blood flowed from the stone. The whole village gathered to see it. Lord Shani came into the dream of the shepherd . He told him to worship him daily. He ordered that no temple  should be built.

So, Lord Shanaishwara can be seen even today, in the open yard without any roof above..  This Shani Shingnapur is visited daily by thousands of devotees praying for Lord Shaneswara’s favour. The place is busiest on Saturdays. Shani Trayodasi is considered to be a favorite day for the lord. Similarly Saturday falling on ‘Amavasya'(new moon day in Sanskrit and many other Indian languages) is considered to be a favourite day for the Lord Shanaishwara and on that days devotees seeking his blessings throng this temple in thousands.Among the people far and wide the greatness and grandeur of Shanishingnapur is now known.