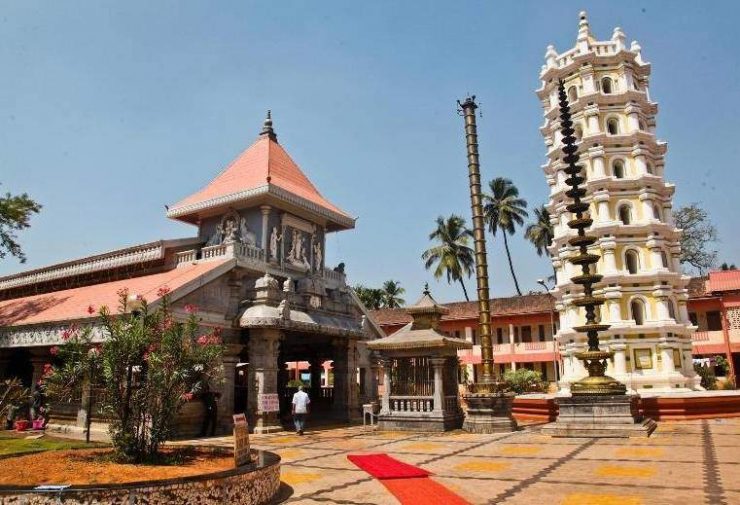 Mahalasa also known as Mhalasa and Mhalsa is a Hindu goddess. She is venerated in two distinct traditions. As an independent goddess, she is considered as a form of Mohini, the female avatar of the god Vishnu and is called Mahalasa Narayani. Mhalsa is also worshipped as the consort of the folk god Khandoba, a form of the god Shiva. In this tradition, she is associated with Parvati, Shiva’s wife as well as Mohini. It is also believed that she is an incarnation of Parvati with the beauty of Mohini as per Lord Shiva’s wish.

As an independent goddess, Mahalasa’s chief temples exist in Mardol also known as Mhardol in the form of Mahalasa Narayani and Nevasa as Mhalsa Mohini or Mhalsa Devi, which is considered as her birthplace as Khandoba’s wife. She is worshipped as the Kuladevi (family goddess) of different castes and communities in the region.

In the Mahalasa Narayani form, Mahalasa has four hands, carrying a Trishula, a sword, a severed head, and a drinking bowl. She also wears the yajnopavita (sacred thread), which is generally dedicated to male deities. She stands on a prostrate man or demon, as a tiger or lion licks blood dripping from the severed head. Goud Saraswat Brahmins as well as Vaishnavas from Goa and South Canara identify her with Mohini and call her Narayani and Rahu-matthani, the slayer of Rahu, as told in the Bhavishya Purana. 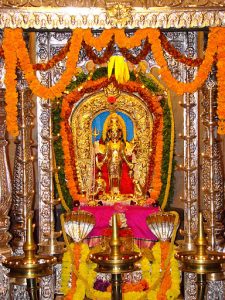 As the consort of Khandoba, her chief temple – the Mohiniraj temple – is located at Nevasa taluka of Maharashtra, where she is worshipped as a four-armed goddess and identified with Mohini. Mhalsa is often depicted with two arms and accompanying Khandoba on his horse or standing beside him.

During the Samudra Manthan (churning of the ocean of milk) by the gods and the demons, the demons steal the pot of amruta (elixir of immortality). The god Vishnu took the form of the enchantress, Mohini. Mohini seized the amruta from the demons and served it to the gods. Mohini is worshipped as Mahalasa Narayani or Mahalasa.

According to another legend linking her to Khandoba, the god Shiva enchanted by Mohini. She promises to be his wife in her earthly reincarnation when he would be incarnate as Khandoba on earth. Mhalsa (as called in the Khandoba cult) is considered a form of Mohini as well as Shiva’s wife Parvati. Mhalsa was born as the daughter of a rich Lingayat merchant in Newasa called Timmaseth. On the divine orders of Khandoba in a dream to her father, Mhalsa was married to Khandoba on Pausha Pournima (the full moon day of Hindu calendar month of Pausha) in Pali (Pembar). Two shivlingas appeared on this occasion. An annual festival marking this event is celebrated in Pali every Pausha Pournima. 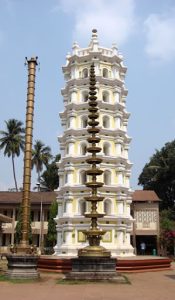 Mahalasa/Mhalsa is worshipped as an independent goddess or grama devata (village guardian deity). Her chief temples stand in Paithan and Nevasa (called Mohiniraj) in Maharashtra and Mardol in Goa. Her temples also exist in the states of Karnataka, Kerala, and Gujarat.[5] She is the Kuldevi (family goddess) of many Hindus from western and southern India, including Goud Saraswat Brahmins, Karhade Brahmins, Daivajna Brahmins, Bhandaris and Shimpi caste.

In recent years, due to the increased popularity of the goddess, new temples have been established in Verna, Kumta, Mudgeri, Kundapura, Basruru, Shirva, Mangaluru, Kasargod, Harikhandige, Malpe and other areas mostly along coastal Karnataka. The temple is also located in Madangeri a small place near to Gokarna.

Mhalsa is also worshipped as the consort of Khandoba. She is worshipped with Khandoba in all centres of his worship, including Jejuri.

The temple of Shri Mahalasa is situated on Mardol ward of Priol Village of Ponda taluka. It is on the National Highway No: 4A (now bypassed) which connects the cities of Panaji to Ponda and Margao. The distance from Panaji to Mardol is 21 km and along the same route, it is nine km away to Ponda. Many inter-state government-run and privately operated buses travel through Mardol.

The nearest railway station is Karmali or Old Goa, on Konkan Railway, from where one can take bus or taxi to Mardol, the other main stations in Goa being Madgaon, Panaji, Vasco Da Gama and Sanvordem.

The airport is located at Dabolim, which is 30 km  from Panaji or Margao.