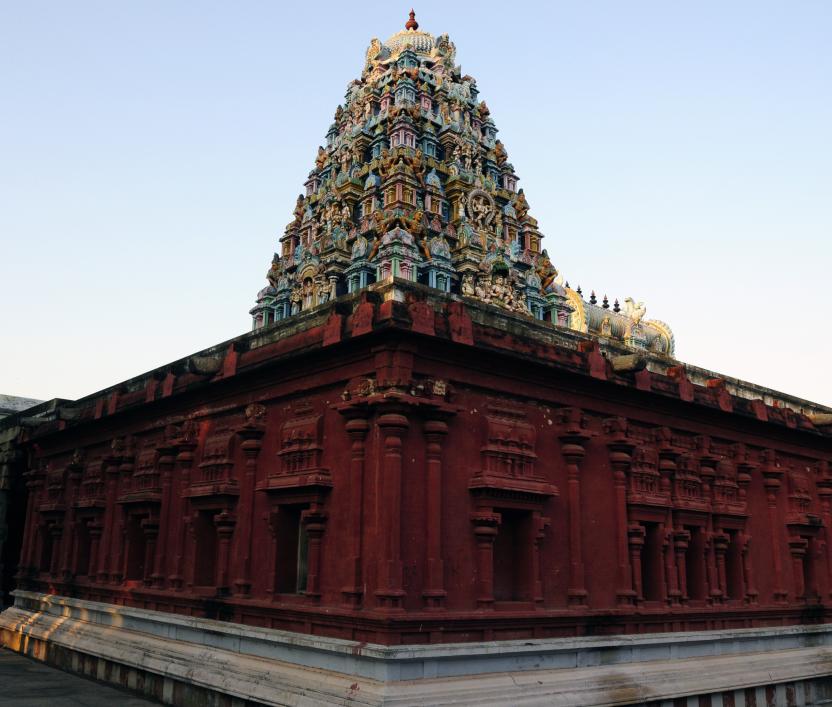 Tirupperunturai known as Avudaiyarkoil, is a Saiva temple. One of the sacred books of Tamil Saiva Siddhanta, Manikkavacakar’s Tiruvacakam, originated from this shrine. Manikkavacakar is said to have converted the king to the cult of Siva and built the temple with money that had been intended for purchase war-horses.

The temple is supposed to have been built by Manickavasakar. Being the prime minister, he spent all the money given to him by the Varaguna Pandya II king to buy horses in building the temple. As he was bereft of money, Lord Siva displayed one of his Thiruvilayadal (holy prank) by transforming foxes to horses and once they were given to the king became foxes.

Saint Manickavasakar (Original Name – Thiruvadhavoorar), then heading the cabinet of Pandya king, came to this place Tirupperunturai to buy horses.  He heard sounds of Sivagama Mantra there and saw a Guru sitting there.  The prime minister fell at the feet of the Lord and begged him to teach him wisdom.  While learning, Manickavasakar plunged into deep meditation.

When he opened his eyes, he found his teacher absent in the place and understood that his Guru was none other than Lord Siva himself.  He spent all the money he carried for buying horses in building a temple for his Guru -Siva and dedicated himself in the service of Lord.
As the saint failed to carry out the order of the king, he ordered the saint to be arrested and jailed.  Lord Siva converted the foxes in the forests into horses, brought them to the king as instructed by Manickavasakar.  After delivering the horses, Lord went away.  However, at midnight, the horses became foxes and started howling.  Angry king, made Manickavasakar stand on the sands of Vaigai River in Madurai under scorching Sun.

To teach a lesson to the Pandya who acted against his devotee, Lord made Vaigai flow in spate.  King ordered to strengthen the banks to avoid a breach.  Lord also came to Madurai as a coolie (Labor) for the repair work.  The king struck him with a cane for not doing the work properly.  The blow only fell on the king and every one in Madurai leaving its scar on them.  The King came to know that all that happened was Lord Siva’s play, fell at the feet of Manickavasakar and begged his pardon. (Seperate story is there for this – Pittuku Man Sumanda Kadai)

There is no Sivalingam but only a pedestal (Avudayar)(Linga is of 2 part, Bottom is Avudayar and Upper Part is Banam) located in the sanctum, hence the name Avudayar Koil. His consort is worshipped as Siva Yoga Nayaki in iconless form. There is no Nandi.

A bowl – Kuvalai in Tamil – is placed on the Avudayar personified as the body and the inner empty space as Athma-soul.  An kind of oil prepared with 108 herbal is used for abishek

As Lord dwells in all beings being their Athma, He is praised as Lord Athmanathar.

Goddess Devi performed penance here to make amends for disobeying the advice of Lord Siva not to attend the Daksha Yagna.  She was formless then.  Poojas are offered only to the feet of Goddess Devi as the shrine is always kept closed.  To facilitate darshan of the feet (Pada), a mirror was arranged.  Devotees can have only Pada darshan.  The abishek theertha and kumkum is offered as Prasad.

Contrary to traditional absence of pooja in temples during eclipse time, it is otherwise here conducting the six time pooja as usual even during such occurrence.  The belief is that eclipses cannot stop the pooja for Siva having no beginning or end – no Aadhi Andham.

There is deep spiritual significance in the queerness. Hinduism allows deity worship only for beginners in the initial stage. As the devotee and his devotion matures, he has to realise the truth of formless. To illustrate the theology, the temple has been designed. This is the only Saivite shrine in whole of India to portray the supreme truth symbolically. Since the soul (athma) has no form, the deity is called Athmanathar

Inscriptions found in this temple describe it as a chaturvedhi mangalam denoting the fact that it was the home of great scholars, who were masters of all the four Vedas, the holy scriptures of Hindus.