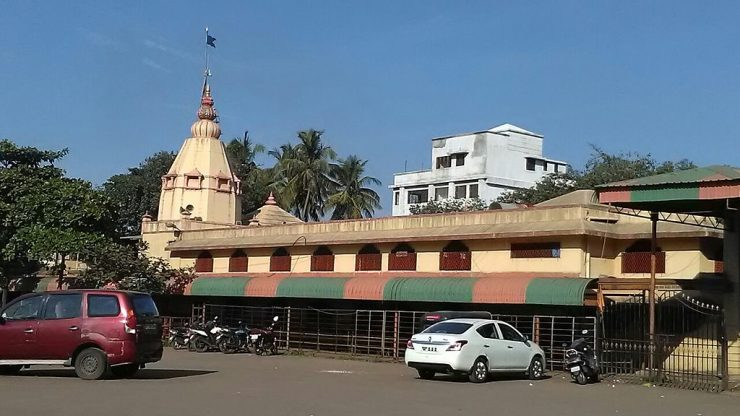 Titwala Mandir, also known as Siddhivinayak Mahaganapati Temple is one of the most famous Hindu temples and pilgrimage spot in Titwala, Thane District of Mumbai. It is dedicated to Lord Ganesha as well as Lord Shivshankar. This place is visited by thousands of devotees each year, who believe that Lord Ganesha will fulfil all their wishes if they offer him their prayers.

Visitors often spend around 2-3 hours here and this temple is best known for Angkor Sankashti and Sankashti Chaturthi.

On these festivals, the temple is highly crowded and rituals take place throughout the day. It is also most crowded on Tuesdays. Titwala Ganesh Mandir is decorated with flowers, high pedestals and profuse garlands. Built in authentic Maharashtrian style, this temple is the epitome of auspiciousness in this city. People often believe that this mandir is famous for uniting married couples who are separated or people who wish to get married. All in all, those who follow lord Ganesha or are interested in the religious beliefs followed in Maharashtra must visit the Titwala Ganesh Mandir.

The legend of Titwala Ganesh Mandir says that it belonged to the Katkari tribe of Dandakaranya village. Sage Kanva, a writer famous for the Rigveda and Angirasas, used to live here. He adopted Shakuntala, who was abandoned immediately after she was born, and whose stories were mentioned in the Mahabharata.

King Dushyanta of Gandhara Kingdom was once passing through the Dandakaranya forest when he came across Shakuntala and the two fell in love. As a sign of their marriage and bond, Dushyanta offered Shakuntala a ring as a promise that he will return to her once the unrest in the capital is settled. One day, while dreaming of her love, Shakuntala forgot to pay attention to the sage Durvasa who had come to visit her. In anger, he cursed her saying that the person she was dreaming of would never recognise her again. After seeing the gravity of the issue, sage Kanva took his beloved daughter to the buried temple of Siddhivinayak where her genuine prayers eventually led her to reunite with Dushyanta.

The history of Siddhivinayak temple dates back to during the rule of Peshwa Madhavrao I. Initially built by Shakuntala, this temple was submerged under a water tank. When the Peshwa ordered to resolve the drought situation in the town, the temple was de-silted, providing drinking water for everyone. During this excavation, Peshwa Sardar Ramchandra Mehendale found the image of Lord Ganesha buried in the silt. Subsequently, the renovation of this temple began and Peshwa Madhavrao I placed the Ganesh idol in this stone temple after he conquered the Vasai Fort. However, the temple was in poor condition and simply had a wooden sabha mandap (an audience hall). It was only in 1965-66 that around rupees 200,000 was put into creating an entirely new temple in this location.

The temple is spread across 15-17 acres of land donated by the Peshwas as well at the Joshis who are the supreme priests of the temple. Inside, there are a number of galleries that can be overlooked through the main hall that measures 90 feet by 45 feet. The temple is placed on a raised stone that is 3.5 feet high and has marble flooring. The temple also includes shrines of Ashtavinayaka and Shiva-linga along with central images from eight Ganesha temples near Pune. The temple is beautifully surrounded by the Kalu River that offers boating to visitors.

The daily timings for Titwala temple are as follows:

The temple is particularly visited on Angarika Chaturthi which is on the fourth Tuesday of every lunar fortnight which is considered an auspicious day to worship Lord Ganesha. Ganesh Chaturthi and Ganesh Jayanti are celebrated extensively with over 500,000 devotees worshipping Lord Ganesha at this temple during the months of August-September. Maghi Ganeshotsav, the birthday of Ganesha calls for a vast number of devotees from Mumbai.