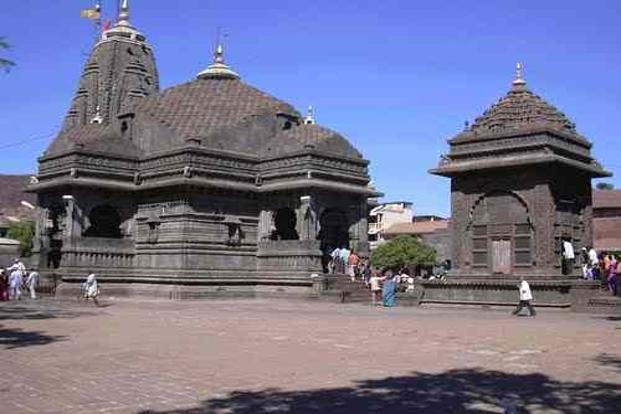 Trimbakeshwar or Tryambakeshwar is an ancient Hindu temple in the town of Trimbak, in the Trimbakeshwar tehsil in the Nashik District of Maharashtra, India, 28 km from the city of Nashik and 40 km from Nashik road. It is dedicated to the god Shiv and is one of the twelve Jyotirlingas, where the Hindu genealogy registers at Trimbakeshwar, Maharashtra are kept

In the village, Trimbak Trimbakeshwar temple is a famous pilgrim place. Trimbakeshwar is also the origin of river Godavari. Trimbakeshwar is one of the 12 jyotirlingas (and the eighth one in the series) of Lord Shiva and this one is considered to be the main jyotirlinga. Monday is a scared day here and Shivratri the holy day of Shiva Puja in a year is celebrated here. The Goddess in this temple is called Trimbakeshwari. This temple was constructed by Raju Balaji Baji Rao who ruled Maharashtra. Later, so many Maratha kings contributed in several ways to improve the temple. Very nearer to the temple, Papaharini Theertam is located. People take bath here before visiting the temple which is considered as a holy bath. This place is formed by river Godavari after falling from Brahmagiri.

Trimbakeshwar Temple has been built by Peshwa Nana Saheb in the 18th century. It stands within a spacious courtyard and is constructed with a black stone in the Nagara style. The temple has a high Shikhara which is internally a square. This Shikhara has a giant amalaka, which is a lotus-shaped disk made up of stone. On the top of Amalaki is the golden kalasha. Inside the temple, one can see a garbhagriha, which is the innermost part of any temple where the Lord resides. In front of this garbhagriha is a mandap or a hall which is opened from three sides for devotees to enter. Various designs of flowers, images of gods, humans, and animals have been carved on the arches and pillars. Altogether, the architecture of the temple is quite simple with not very intricate and immaculate carvings.

The Linga present inside the temple is called asTrimbaka because Lord Shiva has three eyes. The three thumb-sized Lingas present in the sanctum represent Brahma, Vishnu, and Shiva. However, the main Lingam is present in a depression on the floor of the sanctum. Generally, the lingams are covered with a silver mask but, on festivals, a golden crown can be seen on the lingas. Also, a mirror is placed at a considerable height in the sanctum so that the devotees can see the Lord from a distance.