Vaitheeswaran Temple or Pullirukkuvelur is a Hindu temple dedicated to the god Shiva located in Tamilnadu, India. Shiva is worshipped as Vaitheeswaran or the “God of healing” and it is believed that prayers to Vaitheeswaran can cure diseases. It is one of the nine Navagraha (nine planets) temples associated with the planet Mars (Angaraka). The village is also known for palm leaf astrology called Naadi astrology in Tamil. 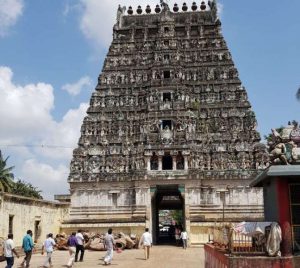 The holy waters of the Siddhamirtham tank within the temple complex contain nectar, and a holy dip is believed to cure all diseases.

During the Ramayana period, Rama, Lakshmana, and Saptarishi have worshipped the deity in this place. There is a pond at this temple called Jatayu kundam (pot of Jatayu having holy ash of Vibhuti). One of the nine planets, Angaraka (Mars), suffered from leprosy and was cured by Vaidhyanathaswamy and from then on it is treated as one of the Navagraha Temples for planet Angaraka.

Parvati, the consort of Shiva, asked her son, Subramanya to appear with one face from his regular appearance of six faces. When he did so, she was pleased and presented him with vel (a weapon) to slay the demons. Subramanya overcame the asura Surapadman (a demon) and in the war, his army was severely injured. Shiva came out as the healer Vaitheeswaran and cured the wounds.

The temple has a five-tiered gopuram (temple tower) and large precincts. The central shrine is that of Vaitheeswaran present as lingam in the innermost sanctum.

The first precinct around the sanctum has the metal image of Subramanya, worshipped here as Muthukumara Swamy. The other metal images in the sanctum are of Nataraja, Somaskanda, Angaraka, and stone sculptures of Durga, Dakshinamoorthy, Surya (Sun god), Jatayu, Vedas, Sampati.

The shrine of Thaiyalnayaki who stands with the medicinal oil to cure the diseases of the devotees is present in the second precinct facing south. The large precinct also has a small shrine to Dhanvantari and a shrine of Angaraka in stone sculpture.

The southern gateway from this precinct leads to the temple tank and directly faces the Thaiyalnayaki shrine. The Sthala Vriksha (temple tree) is margosa (Azadirachta indica) which possesses medicinal properties. It is located in the eastern gateway of the temple. The eastern gateway also has the shrine of Adi (original) temple that has a smaller replica of the main shrines. There is a fine metal image of Gangavisarjanar inside the temple.

Devotees take a holy dip in the temple tank before worshipping Vaitheeswaran in the temple. It is also a local belief that dissolving jaggery (Tamil:vellam) in the waters cures skin diseases. The tonsure ceremony of getting children shaved for the first time to promote proper growth is a very common practice. Mavilaku ma (litting lamp in rice cakes) is a form of worship practiced. The practice of jamming salt and pepper in front of the temple mast and the pot near the temple tank is also followed. Unlike other temples in South India, where each shrine has a priest, each priest in the temple associates themselves with the devotees and perform worship on their behalf. The holy soil rounded with ash (called Thiruchandu Urundai) is treated as medicine and believed to cure all the diseases. Another medicine given is Chandan (sandalwood powder) with saffron. It is a practice to purchase silver-plated images of body parts to put in the Hundi (vessel for offering) to fix ailments one might be having.

By Air: The nearest airport to Vaitheeswaran-Koil is Pondicherry (PNY) Airport which is 91.9 km away.

By Train: Vaitheeswaran Koil railway station is 1km away from Temple.

By Road: From Pondicherry to Vaitheeswaran Koil distance is 90 Km.