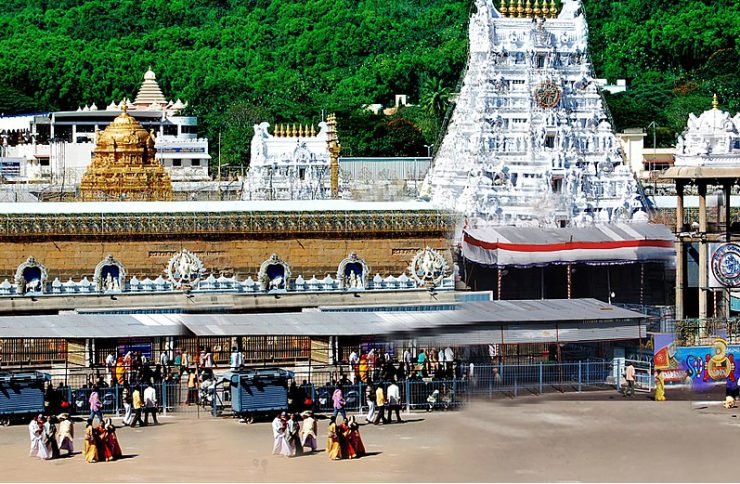 Sri Venkateswara Swamy Temple is a landmark vaishnavite temple situated in the hill town of Tirumala at Tirupati in Chittoor district of Andhra Pradesh, India. Founded in 300 AD, this temple is also one of the many Temples which are built in the Dravidian style.

The Temple is dedicated to Lord Venkateswara, an incarnation of Vishnu. The place is also referred to as Kaliyuga Vaikuntham Tirumala Temple, Tirupati Temple, Tirupati Balaji Temple are some of the many names by which the temple is recognized. The Lord of the Seven Hills is also known by many other names such as Balaji, Govinda, and Srinivasa.

The Tirumala Hills are 853m above sea level. The Hills comprises seven peaks, representing the seven heads of Adisesha. The seven peaks are called Seshadri, Neeladri, Garudadri, Anjanadri, Vrushabhadri, Narayanadri and Venkatadri. The temple is also referred to as “Temple of Seven Hills”. The preciding deity, Venkateswara, is in standing posture and faces east in Garbha griha.  Animal sacrifice is prohibited here.

About 50,000 to 100,000 pilgrims daily visit the temple, while on special occasions and festivals, like the annual Brahmotsavam, the number of pilgrims shoots up to 500,000. There are a very large number of devotees, thus making the temple the richest in terms of donations. Tarigonda Venkamamba Annaprasadam complex for free meals to Pilgrims, and a number of pilgrim lodging sites are also available.

There are several legends associated with the temple. The people believe the legends which say that the temple shall remain here till the Kali yuga i.e the’’ age of (the demon) Kali’’ or the ‘‘age of vices’’ remains. It is said that the temple came into existence without anyone building it.

Many dynasties including Pallava and Chola were committed devotees of Lord Venkateswara. After independence Andhra state was created and Tirupati was assigned by Government of India, integrating it as part of Andhra.