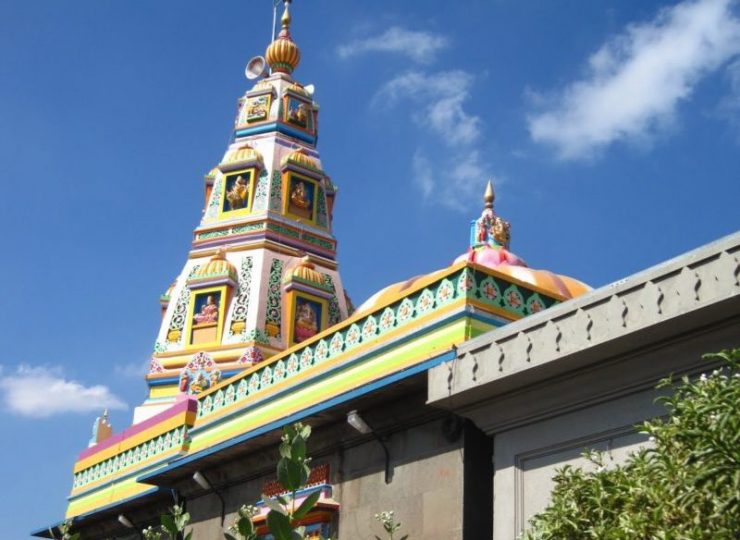 The Vigneshwara Temple Ozar or Ozar Ganpati Temple is a Hindu temple dedicated to Ganesha, the elephant-headed god of wisdom. The temple is one of the Ashtavinayak, the eight revered shrines of Ganesha in Maharashtra, India. The Ganesha form worshipped here is called Vigneshwara (spelt also as Vigneshvar (a), Vigneshwar : “Lord of obstacles”) or Vignahar (spelt also as Vignahara, “Remover of obstacles”) and is associated with the legend of Ganesha defeating Vignasura, the demon of obstacles.

Ozar (also spelt as Ojhar or Ojzar) is located about 85 km from Pune, off the Pune-Nashik highway and about 9 km north to Narayangaon. Ozar is situated on the banks of Kukadi River close to the Yedagaon dam built on it. The temple is famous for its Deepmala’s (a stone pillar) and its Golden dome. Among Ashtavinayakas Vighneshwara temple is the only temple with a golden dome & pinnacle.

Like all Ashtavinayaka shrines, the central Ganesha idol is believed to be svayambhu (self-existent), naturally occurring in the form of an elephant-faced stone. The idol of Lord Ganesha is eastward facing and has its trunk towards the left. The deity is depicted accompanying his two consorts Siddhi (spiritual power), and Riddhi (prosperity). Precious stones are studded in the idol of Ganesha at Kshetra Vigneshwara Temple. The eyes of the idol are embedded with rubies; its forehead is embellished with a diamond and other precious stones are also studded in the navel.

The Ozar Ganpati temple was built in 1785. In 1967, it was rebuilt by Shri Appashastri Joshi. Shri Joshi is an ardent devotee of Ganesha.

The Mudgala Purana, Skanda Purana and the Tamil Vinayaka Purana record: The King of Hemavati, Shri Abhinandana performed a sacrifice in which he did not give any offering to the god-king Indra. The infuriated Indra ordered Kala (Time/Death) to destroy the sacrifice. Kala takes the form of the demon Vignasura (obstacle-demon) or Vigna (obstacle), who created obstacles in the sacrifice and ruined it. Further, he created havoc in the universe, creating obstacles in the good deeds and sacrifices of sages and other beings. The sages asked god Brahma or Shiva for help, who advised the worship of Ganesha. Hearing the prayer of the ascetics, Ganesha began to battle the demon, who soon realized that it was impossible to win and surrendered to his opponent and agreed not to harass the beings of the world. It was arranged that Vigna (obstacles) would be dwell only in places where Ganesha was not invoked or worshipped. In some versions, the remorseful Vigna was made an attendant of Ganesha, who would trouble those who fail to worship his Lord. Vignasura also requested Ganesha to take the name Vigneshwara (The Lord of Vigna/obstacles) to commemorate the event. The relieved sages consecrated an image of Ganesha as Vigneshwara at Ozar to mark the event.

The Vigneshwra Temple Ozar was constructed in the era of the Peshwas. The structure is an epitome of Vastushastra (Architectural Science).

The east-facing temple features a “spacious courtyard, a grand entrance, sculptural and mural work”. It is surrounded by a walled compound with a large gateway flanked by two large stone Dvarapala (gatekeepers) sculptures and a row of four musicians in bas relief on the lintel. One can view the Lenyadri shrine and Shivneri Fort standing on the wall. Two large stone Deepamalas (lamp towers) stand near the gateway in front of a fine corridor of seven cusped arches. There are owaris (small room for meditation) on both sides of the gateway. The courtyard is tiled. The central temple has three entrances with sculptured side posts and lintels; the east one being the central one. The central one has a lintel with a Ganesha in relief surrounded with monkeys and parrots on trees. The temple has two halls, with first one (20 feet high) having the entrances to the north and south too and has the image of Dhundiraj Ganesha. The next one (10 feet high) has a white marble mushika (the mouse, which is the vehicle of Ganesha) seating in attendance. The temple walls are filled with murals and colourful sculptures. The shikhara – over the sanctum – is covered with gold foil. It also has two wide stone Prakarams (outer path outside a Hindu sanctum).

On the entrance of the Ozar Ganpati temple, the sight that we get is of the four Muniputras (Sons of Saints). They are seen holding many different things in their hands.

The first Muniputra and the fourth Muniputra is seen holding a Shivlinga. The second and the third Muniputras are seen holding a Lyre (Veena) in their hands. The first and the fourth Muniputras convey the meaning that Shree Ganaraj gives utmost importance to His parents. This also means that devotees who are observe devotion towards Lord Shiva and Parvati can also observe devotion towards Shree Ganaraj. These Muniputras also convey meaning that devotees of Shree Ganesh should necessarily serve their parents with love & affection as Lord Ganesh Himself is demonstrating. Goddess Saraswati is the Goddess of Knowledge and hence also of Music. Hence the second and the third Muniputras stand to personify devotion and turn it into a pleasurable experience as like music. These two also resemble 15 – 16 year old teenagers. Hence they further convey the message that humans should start on the path of devotion from an early age. Lord Ganaraj welcomes such devotees with great pleasure.

After these Muniputras we can see two saints. One of them is holding a holy book in his hand at the northern end and another one is chanting holy hymns and scriptures which he is counting with help of rosary of sacred beads of Rudraksha. While entering the Temple we see few demonic figures on its entrance steps. These figure convey a definite message to the devotees especially to the ones who are engrossed in holy reading and chanting like the two saints mentioned above that while entering such holy premises that they should kill all the demonic thoughts in their minds and only then step inside. After this before going in front of the Lord we can see Ganesh Muni to whom we should bow to. On His head we can see Sheshnag. Again above the Sheshnag we can see a demonic figure. But conversely He is the local deity (Vastupurush) The story of this Vastupurush is also very unique and interesting.

From between these two munis starts the entrance. At the start of the entrance there is a beautiful arch which has a delightful vine of shoe flower in its centre. The Shoe flower is the favorite flower of the Lord Ganesh and is also the sign of soft and glowing skin.

Further we can see two standing guards who protect all the Ganesh devotees. After we come inside the main entrance gate we can see the four descending steps. These four steps stand for main vices in humans viz., anger, greed, arrogance and jealousy. These steps remind us that these vices should be forgotten when we enter the holy temple premises. A marble statue of the mooshak, a mouse, Lord Ganesh’s vehicle is placed in the Sabhamandapa.

As we enter the first hall (mandap) we can see a sculpture of blissfully pleased tortoise. On both sides of the main temple are stationed Usher (Bhaldar) and Mace (Chopdar) bearer. These guards symbolize guards; Yam and Dam who are considered to be guards of the huge floodgates of our mind. When we enter inside, we walk into a round domed structure which fills our minds with happiness and ecstasy. As we move further with emotion filled minds we enter the 3rd domed structure and witness exactly what we are here for.

Archeologists and historians opine that the temple is most possibly built by the famous Peshwa, King Chimaji Appa. Chimaji, after defeating the Portuguese dictators of Vasai and Sashti, renovated the temple in 1785 AD. The king also covered the temple spire (shikhara) with gold, which is the most prominent feature of the temple today.

The Ozar Ganpati temple celebrates the usual festivals associated with Ganesha: Ganesh Chaturthi and Ganesh Jayanti. In addition, a five-day festival starting on Kartik Poornima is also celebrated when the Deepamalas are lit.

The holy occasions of Bhadrapad Shudh Chaturthi and Magh Shudha Chaturthi are celebrated with pomp by people from all the adjoining villages and areas by coming together.

The festival of Bael Pola (Bullock Festival) is also celebrated in a similar fashion in which the traditional high seat is given to the bulls of the person quoting the highest at the auction.

By Road: Ozar is in the Junner Taluka in Pune District. Pune-Ozar distance is 85 km. On the Pune- Nasik Road on passing through Chakan, Rajgurunagar, Manchar, one comes to the towns Narayangaon and later to Junnar. Ozhar is 8km from both Naryangaon and Junnar. There are many buses that travel on a regular basis to the Vigneshwara Temple Ozar.

By Train: Pune and Talegaon are the two closest Railway Stations.

By Air: Pune Lohegaon Airport, around 10 km from Pune, is the nearest airport. This airport is connected to all the domestic airports in India.