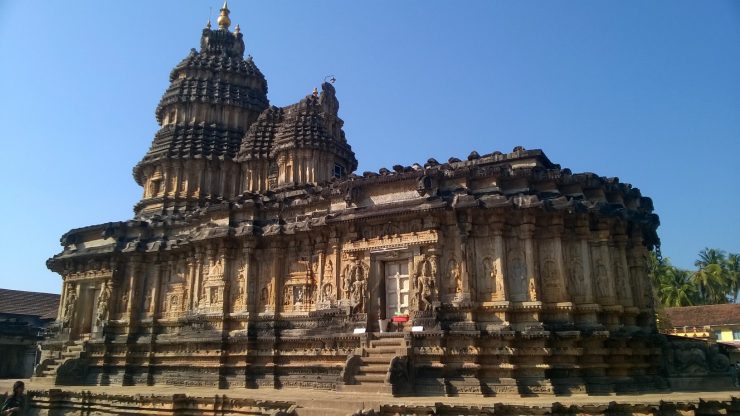 The Sringeri Sharada Peetham is located on the banks of River Tunga in the Chikkamagalur district of Karnataka. was the first of the four Ammaya Peetham established by Sri Adi Shankaracharya in 8th century AD. The word Ammaya Peetham means “Throne of the Veda”. 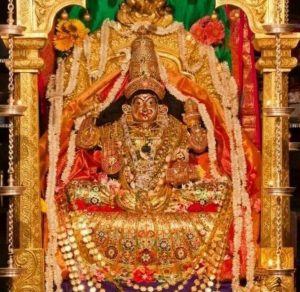 Sri Adi Shankaracharya established four Peethams or Centers in the four corners of the country to safeguard and propagate the Vedas. The head of the Mutt is called Jagadguru meaning “Teacher of the world”. Although the Sringeri temple was established in the 8th century, the documented history is present only for the period after the 14th century.

The Sringeri Temple Complex is huge and consists of many temples as mentioned below:

Sri Sharadamba Temple – The Temple is made of granite stones. The Mahamandapam has huge stone pillars exquisitely carved with deities like Durga, Raja Rajeshwari, Dwarapalakas, and Devis which are all sculpted according to the Shilpa Sastras practiced in Tamilnadu. The door of the temple is made of Gold covering and is unique because it has 8 panels with figures of Ashtalakshmi inscribed on them.

Sri Torana Ganapati Temple – The unique shrine is a simple silver door with a gold-covered idol of Ganapati on the top. It is customary for devotees to first have darshan of Torana Ganapati and then proceed to visit Sri Sharadamba.

Sri Vidyashankara Temple – The Temple was built in 1338 AD in the Chalukyan and Dravidian style of architecture. The Garbhagrah is on the west side with Vidya Ganapati and Durga as the main deities. The other three sides are governed by Brahma, Vishnu, and Shiva.

Sri Janardhana Temple – The Temple was built around the 9th century. The Temple is dedicated to Lord Vishnu as Janardhana. The idol of Lord Janardhana is flanked on both sides by Sridevi and Bhudevi. The idol is covered with Sandal paste throughout the year.

Sri Kodandaramaswami Temple – A small Temple dedicated to Lord Rama, Lakshmana, and Sita are present on the right of the Sri Sharadamba Temple.

Besides these Temples, Sri Adi Shankaracharya established four guardian deities in the four directions to protect the town. They are Kalabhairava in the East, Anjaneya in the West, Durga in the South, and Kalikamba in the North. 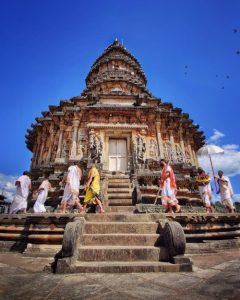 Since Sringeri is situated in the Malnad region, the best time to visit is between October and March.

By Air: The nearest airport to Sringeri is the Mangalore Airport located 110 km away

By Train:  Shimoga and Kadur are the nearest railway stations.

By Road: Bus services are available from most places in Karnataka to Shringeri.