Contents hide
1 About Ugratara Temple
1.1 Shri Ksetra Gangapurdatta Temple Read More
2 History
3 How to Reach
3.1 Share this:
3.2 Like this:
3.3 Related

Ugratara Temple is a temple dedicated to Tara (Devi) located on the western side of Jor Pukhury tanks in the heart of Guwahati city in the Lotaxil (Latasil) locality in Northeast India. The Ugratara Temple in Uzan Bazaar in the eastern part of Guwahati, Assam is an important Sakti shrine. Legend says that the navel of Sati, the first consort of Shiva, is related to this temple. Ugratara in Assam is generally identified with Tiksna-Kanta, Eka-Jata, etc., of the Buddhist pantheon. 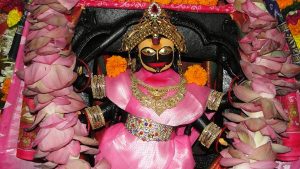 The present temple of Ugra Tara was built by Ahom King Siva Singha in 1725 AD who had excavated a tank three years before. The tank, known as Jorepukhuri, is situated to the east of the temple. The tank still exists, though the upper section of the temple was destroyed by a devastating earthquake. This was however rebuilt by a private citizen.

In the garbhagriha of Ugra Tara there is no image or idol of her. A small pit filled with water is considered as the Goddess. The temple of Ugra Tara is small and beautiful to view. There is a Shivalaya beside Ugra Tara temple and a pond behind both temples.

Once upon a time, Yama (Lord of the Hell) made a complaint to Brahma that nobody is coming to the Hell from Kamarupa because of the sacredness of the area, despite doing sins. Brahma carried this complaint to Vishnu. Vishnu took them to Shiva. Lord Shiva ordered Goddess Ugra Tara to drive away all the people who are living in Kamakhya so she sent her army. 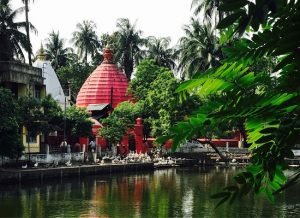 In the course of this drive, they laid their hands on Rishi Vasishtha who was meditating on Shiva at Sandhyachal. Vasishtha became angry and cursed Ugra Tara and Shiva. From then onwards all the Vedic (Shiva) sadhanas are given up in Kama rupa and Ugra Tara became a Goddess of Vamachara sadhana. All her army became Mlechhas.