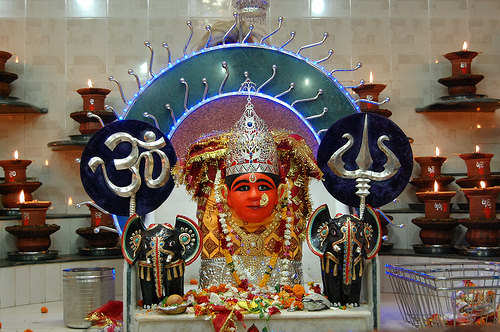 Ganga Maiya Temple is located at Jhalmala, near Balod-Durg road, in Balod Tehsil of Chattisgarh. It is a religious place with historic importance. This temple has a glorifying bliss and a very enchanting history. Originally, Ganga Maiya temple was constructed by a local fisherman in the form of a small hut. A local religious belief of Balod is related to the origin of Ganga Maiya Temple. Initially, the temple was built in form of a small hut. Several devotees donated a good amount of money which helped to construct it into a proper temple complex. Since it is located on the Balod – Durg road, it’s absolutely convenient to reach the shrine from any district of Chhattisgarh.

The history of the construction of the temple is also curious. Once a fisherman catching fish in the pond near the village encountered an idol that got caught in the net, along with the fish. However hard he tried to immerse the idol in water sifting it from his net, it just remained stuck inside. Frustrated, he went home. That very same night, a tribal villager, Gond had a dream about “I am being ignored by fishermen and take me out and get installed”. Taking this as a sermon from the goddess, Gond, the tribal went to the pond the next morning and retrieving the idol, installed it in a ‘kuccha’ hut, near the village.

Initially, it was renovated by Shri Bhikam Chand Tawri and a fresh temple-shape was given. After this, the whole reconstruction process has begun and is now the premiere place bustling with activities. The trust takes care of the temple and other multitasking, like cultural activities and problem-solving of the villagers. Medical camps are arranged from time to time to serve the poor mankind; free medicines are distributed.