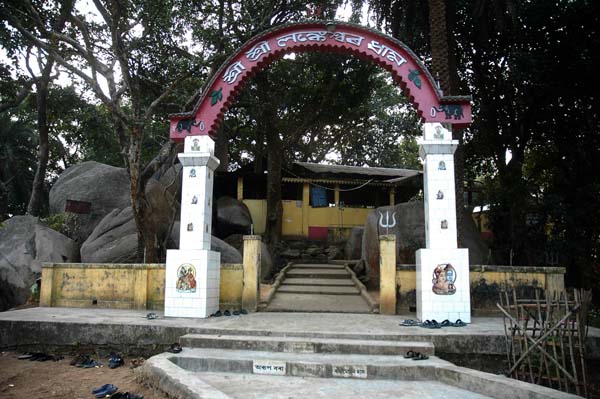 Contents hide
1 About Lankeshwar Temple:
2 History:
3 Architecture:
4 How to Reach:
5 Poojas and Festivals:
6 Share this:
7 Like this:
8 Related

Lankeshwar Temple is an ancient Shiva temple on top of a hillock in the western part of the Guwahati city near Guwahati University campus. The Lankeshwar Temple of Assam is an ancient temple dedicated to Lord Shiva. The temple is placed atop a hill amidst a picturesque location. Lankeshwar is one of the many forms of Lord Shiva. The followers of Lord Shiva considered the temple as one of the most sacred one. Devotees all around the year visit this temple and seek divine blessings.

The Lankeshwar Temple in Guwahati is not only popular with the religiously inclined people but with the general tourists also. Most common visitors are amongst the couples of Guwahati city, students of Guwahati University, and that of Assam Engineering College. The wonderful location of the temple is a major reason for this. Since it is situated in a convenient location in the city, it is very easily accessible.

This temple is not only famous among the Hindu devotees but also among the usual visitors of Assam. According to Hindu mythology, Ravana, the king of Lanka (now Sri Lanka) worshiped Bhagwan Shiv at this place. Hence it is known as Lankeshwar. The temple has various religious sculptures that show its religious significances. Here, pilgrims can see marble-made stairs that will lead to the sacred temple. There are a total of 452 steps.

On the eve of Maha Shivaratri, a religious festival devoted to Lord Shiva, devotees come here to have sacred Darshan and blessings of divine power. Since the temple is located at easily accessible area, the pilgrims can easily visit here. The temple was constructed by the then king of Guwahati city many centuries ago. According to Hindu mythology, this temple is one of the most respectable as well as sacred Shiva temples in the country. It is said that once a person visit this temple, his all sins would be removed.

Lankeshwar Temple was constructed on the top of a hill surrounded by scenic beauty. Lankeshwar is regarded as one of the several forms of Lord Shiva. According to a legend Ravana, the king of Lanka had worshipped Lord Shiva here. Hence it is known as Lankeshwar. There are some stone sculptures that adorn the beauty of the temple. Devotees visiting the temple need to climb almost 452 marble steps to reach the temple. The staircase has been built by the monetary contributions of the pilgrims.

The temple is well connected by various modes of transport. It is almost 15 km away from Guwahati. Tourists can avail the buses plying from different parts of the city. Guwahati City Bus Number 6 provides with direct public transportation.

The Temple can be reached through nearest Guwahati Airport (12 Km) which is well connected with regular domestic flights to Delhi, Mumbai, Hyderabad, Bangalore, Chennai and other metropolitan cities.

The temple opens at 6:00 AM and closes at 6:00 PM. During this period rituals of lord Shiva are performed. Archana, Abhishekam and Arathi are the daily rituals performed in the temple.

Lankeshwar Temple every year celebrates the festival of Maha Shivaratri on a grand scale. Devotees from different places throng the temple on this day.