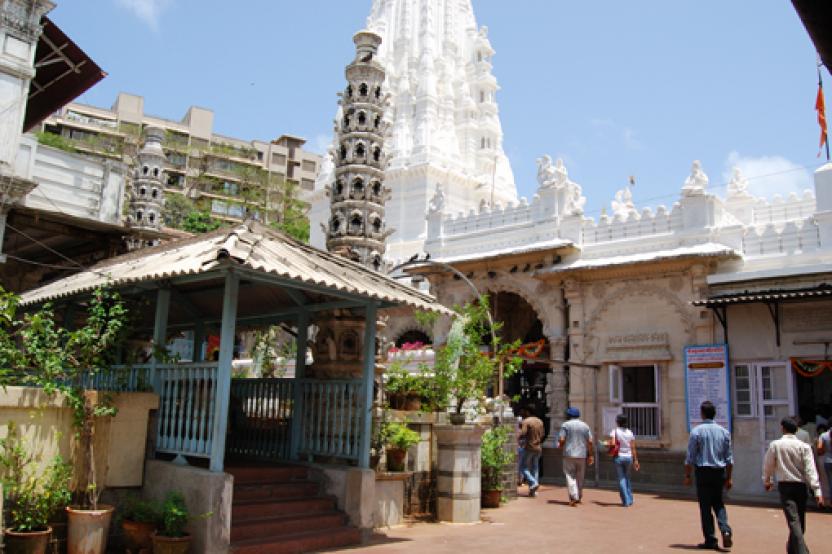 Babulnath is an ancient Shiva temple in Mumbai, India. Situated on a small hillock near Girgaum Chowpatty, it is one of oldest temples in the city. Shiva in the form of the Lord of the Babul tree is the main deity in this temple.

The faithful climb up to the temple and obtain Darshan of the shivling and obtain blessings of the Lord. It is also possible to take an elevator up to the temple. The temple is visited by lakhs of devotees on Mahashivratri festival. Babulnath Temple Shiva Linga and Idols were originally consecrated in the 12th century by the then Hindu king Raja Bhimdev of the region.

Out of this the first four are in the temple. The fifth one was immersed in the sea because it was broken when it was dug out in the 18th century. When the first temple was built the land belonged to the Parsi community. There were 5 Dakhma’s (Parsi final resting place) existing in the vicinity. There was a lot of resistance for the Parsi community at that time for building of the temple. This resistance continued till the late 1800 when the issue was settled by the courts in favour of the temple.

The Babulnath Temple was patronised when built for the first time by Hindu merchant of that time and mainly the Gujarati community. A bigger temple was built in 1890 by contributions from the Gujarati merchants and the likes of Maharaja Sayajirao Gaikwad of Baroda state. The current temple structure can be dated back to 1890.

The temple height was considerable when built in 1890 but a lightning strike in the 1960s and damage to the spire lowered the height of the present temple considerably. Till the 1980s Babulnath Temple was one of the tallest structure & location in the city of Mumbai.

There is limited reference to Babulnath Temple in the historical texts, because in the initial days the temple was frequented by yogis who used to stay there for Bhang and Ganja. However the temple famed in the 20th century. Currently the temple is thronged by people on Mondays and during Mahashivratri & Shravan months.