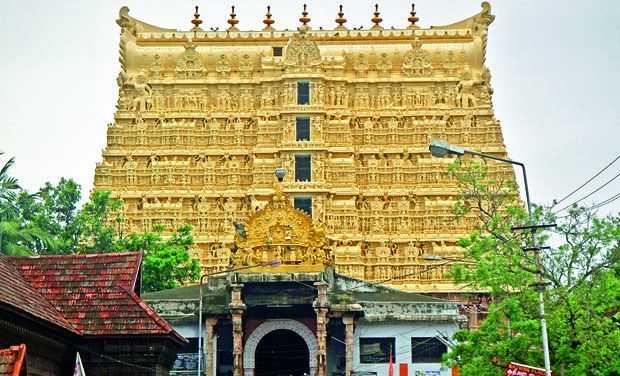 Padmanabhaswamy temple is located in Thiruvananthapuram, Kerala, India. The temple is built in an intricate fusion of the indigenous Kerala style and the Dravidian style of architecture associated with the temples located in the neighboring state of Tamil Nadu, featuring high walls, and a 16th-century Gopuram. While the Moolasthanam of the temple is the Ananthapuram Temple in Kasargod, architecturally to some extent, the temple is a replica of the Adikesava Perumal temple located in Kanyakumari District.

It is the richest Hindu temple in the world. In terms of assets gold and precious stones, it is by far the wealthiest institution and place of worship of any kind, in the recorded history of the world. The principal deity Vishnu is enshrined in the “Anantha Shayanam” posture, the eternal yogic sleep on the serpent Adisheshan. Sree Padmanabhaswamy is the tutelary deity of the royal family of Travancore. The titular Maharaja of Travancore Moolam Thirunal Rama Varma is the trustee of the temple as Sree Padmanabhadasa, the slave of Lord Padmanabha. In line with the Temple Entry Proclamation, only those who profess the Hindu faith are permitted entry to the temple and devotees have to strictly follow the dress code. Several extant Hindu Texts like the Brahma Purana, Matsya Purana, Varaha Purana, Skanda Purana, Padma Purana, Vayu Purana, Bhagavata Purana and the Mahabharata mention this shrine.

The Temple has been referred to in the (only recorded) Sangam Period of Tamil literature between 500 B.C and 300 A.D several times. Many conventional historians and scholars are of the opinion that one of the names that the Temple had – “The Golden Temple” – literally was in cognizance of the fact that the Temple was already unimaginably wealthy by that point. Many extant pieces of Sangam Tamil literature and poetry, and even the later works of Ninth Century poet-saints like Nammalwar, refer to the Temple and even the city as having walls of pure gold. At some places, both the Temple and the entire city are often eulogized even as being made of gold, and the Temple as Heaven.

In the early medieval Tamil literature canon of the Tamil Alvar saints (6th–9th centuries AD), the temple is one of the 108 principal Divya Desams (“Holy Abodes”) in Vaishnavism, and is glorified in the Divya Prabandha, . The Divya Prabandha glorifies this shrine as being among the 13 Divya Desam in Malai Nadu (corresponding to present-day Kerala and some adjoining areas). The 8th century Alvar Nammalvar sang the glories of Padmanabha.

The Ananthapuram Temple in Kasargod is believed to be the ‘Moolasthanam’ of the Temple. The sage Vilvamangalathu Swamiyar, who resided near Ananthapuram Templein Kasargod District, prayed to Lord Vishnu for his darshan or “auspicious sight”. The Lord is believed to have come in the guise of a little boy who was mischievous. The boy defiled the Idol which was kept for Puja. The sage became enraged at this and chased away the boy, who disappeared. After a long search, when he was walking on the banks of Arabian Sea, he heard a pulaya lady threatening her child that she would throw him in Ananthankadu. The moment the Swami heard the word Ananthankadu he was delighted. He proceeded to Ananthankadu based on the directions of the lady of whom he enquired. The Sage reached Ananthankadu searching for the boy. There he saw the boy merging into an Iluppa tree (Indian Butter Tree). The tree fell down and became Anantha Sayana Moorti (Vishnu reclining on the celestial snake Anantha). But the edifice that the Lord assumed was of an extraordinarily large size, with His head at Thiruvallom, navel at Thiruvananthapuram, and lotus-feet at Thrippadapuram (Thrippappur), making him some eight miles in length.

The Sage requested the Lord to shrink to a smaller proportion that would be thrice the length of his staff. Immediately the Lord shrank to the form of the Idol that is seen at present in the Temple. But even then many Iluppa trees obstructed a complete vision of the Lord. The Sage saw the Lord in three parts – thirumukham, thiruvudal and thrippadam. Swami prayed to Padmanabha to be forgiven. The Swami offered Rice Kanji and Uppumanga (salted mango pieces) in a coconut shell to the Perumal which he obtained from the pulaya woman. The spot where the Sage had darsan of the Lord belonged to Koopakkara Potti and Karuva Potti. With the assistance of the reigning King and some Brahmin households a Temple was constructed. Koopakkara Potti was made the Tantri of the Temple.