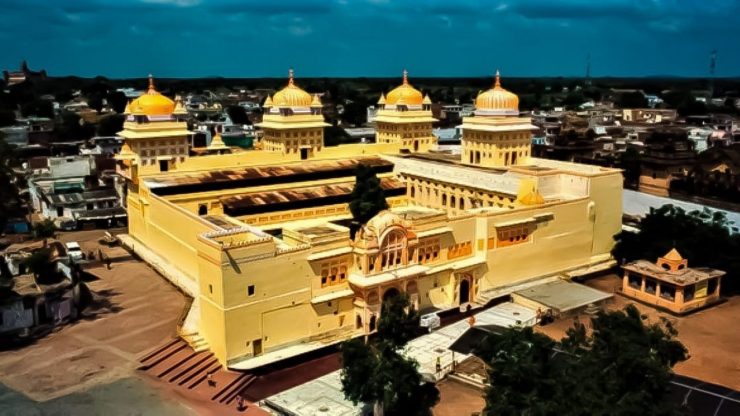 The Ram Raja Temple is a temple in Orchha, Madhya Pradesh, India. It is a sacred Hindu pilgrimage and receives devotees in large numbers regularly and is also commonly known as Orchha Temple. The annual domestic tourist number is around 650,000 and the foreign tourist number is around 25,000. The daily number of visitors to the temple range from 1500 to 3000 and on certain important Hindu festivals like the Makar Sankranti, Vasant Panchami, Shivratri, Ram Navami, Kartik Purnima and Vivaha Panchami the number of devotees who throng to Orchha range in thousands. In India, this is the only temple where Lord Ram is worshipped as a king and that too in a palace. A Guard of Honour is held every day, police personnel have been designated as Guards at the temple, much in the manner of a king. The food and other amenities provided to the deity at the temple are a royal repast. The armed salutation is provided to Lord Ram every day.

The story of Ram Raja Temple according to many local people goes like this: The King of Orchha Madhukar Shah Ju Dev (1554 to 1592) () was a devotee of Banke Bihari (Lord Krishna) of Brindavan while his wife Queen Ganesh Kunwari (), also called Kamla Devi, was a devotee of Lord Ram. One day the King and the Queen () went to Lord Krishna’s temple but the temple had closed by that time. The queen urged the king to go back but the king wanted to stay. So both the king and queen decided to stay back. They joined a group of devotees who were singing and dancing in praise of Lord Krishna outside the temple. The king and queen also joined in the prayers and started to sing and dance. It is believed that Lord Krishna and Radha personified and danced with them and golden flowers were showered from the heavens at that moment. 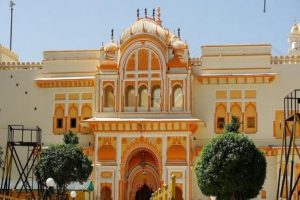 After that incident, the king asked the queen to accompany him to Braj-Mathura the land of Lord Krishna, but the queen wanted to go to Ayodhya. The king got annoyed and told the queen to stop praying child form of lord Ram and accompany him to Braj. But the queen was adamant, after which the king said that “You keep praying to Ram but Ram never appears in front of us, unlike Lord Krishna who danced with us along with Radha the other day. If you are so adamant to go to Ayodhya then go, but return only when you have the child form of Ram with you. Only then will I accept your true devotion.” The queen took a vow that she would go to Ayodhya and return with the child form of Ram or else she would drown herself in Ayodhya’s Sarayu river. The queen left the palace and started the long journey to Ayodhya on foot to bring Lord Ram with her to Orchha. She didn’t tell the King before leaving that she had ordered her servants to start building a temple (Chaturbhuj Temple) when she brings Lord Ram with her.

On reaching Ayodhya, the Queen started praying to Lord Ram close to Laxman Fort near Sarayu river. She ate only fruits, then she gave up fruits and ate only leaves, and eventually she gave up all food. The Queen fasted and prayed for about a month but Lord Ram did not appear, so eventually in despair, she jumped into the river at midnight. Just then something magical happened and Lord Ram appeared in child form in the Queen’s lap.

Lord Ram told the queen that he was happy with her prayers and she could ask for a boon, at which the queen asked Ram to come with her in child form to Orchha. Ram agreed to go but he put forth three conditions: “I will travel only in Pukh Nakshatra. When Pukh Nakshatra will end I will stop and resume only when Pukh Nakshatra sets in again. In this manner, I will travel from Ayodhya to Orchha on foot along with a group of sages. Secondly, once I reach Orchha, I will be the King of Orchha and not your husband. Thirdly, (since the child form of Ram would travel in the queen’s lap), the first place you sent me will be my final place of stay and will be famous by the name of Ramraj.” The Queen agreed and started her journey to Orchha with baby Ram in her lap. Since the queen travelled only in Pukh Nakshatra it took 8 months and 27 days for the queen to reach Orchha from Ayodhya on foot (between 1574 to 1575).

King Madhukar Shah meanwhile had a dream where Lord Banke Bihari scolded him on discriminating between Lord Ram and himself. Lord Banke Bihari reminded the King that Lord Ram and he are one and the same, there is no difference. King was very apologetic when he woke up and found out that the queen was returning from Ayodhya. The King went to a receiver the queen with horses, elephants, servants, food, etc. and apologised to the queen. The queen did not accept king’s apology and refused the comforts offered to her by the King. The Queen claimed that she now possessed everything one could ever ask for (Lord Ram in child form). On returning to Orchha, the queen went back to her palace with baby Ram and retired in her room for the night, only to take Lord Ram to the Chaturbhuj Temple the next day. But according to Lord Ram’s conditions he took the first place where he was seated, hence Lord Ram transformed into an idol and got transfixed in the queen’s palace itself. To this day the Ram Raja Temple is in the queen’s palace (Ranivaas or Rani Mahal) and not in the Chaturbhuj Temple (Orchha) which is right next to the palace. Originally, lord Ram was standing position and the queen was serving Him 3–4 hours every day in standing position and used to get tired. Lord Rama requested to serve Him sitting only but queen replied that Your Lordship is standing then how she can sit. The deity of Lord Rama sat down on hearing this from the queen (source Bhaktmal by Nabhadasji Maharaj). Additionally, as promised by the queen, Lord Ram is the King (Raja) of Orchha, hence the name Ram Raja Temple.

Shri Ram is sitting in Padmasan (Lotus position), with only left leg crossed over the right thigh though (both legs are not crossed unlike in the usual Padmasan). Every day after worship sandalwood’s teeka is applied on Lord Ram’s left toe. It is believed when visiting the Raja Ram Darbar if worshippers look at the left foot’s big toe then their wish gets fulfilled. Spotting the left foot’s big toe on Lord Ram’s idol is not easy, one should not look down since the left leg is folded, instead one should look close to Lord Ram’s right hand. The temple priest can also help in spotting the toe.

By Air: The Nearest airport to Orchha are Gwalior and Khajurao

By Train: The nearest Railway station to orchha is Jhansi 16 kms to away

By Road: It is well-connected by road to places like Jhansi, Gwalior and Khajuraho. You can hire a taxi or bus to reach Orchha.