Umananda Devaloi is a Shiva temple located at the Peacock Island in the middle of the river Brahmaputra just opposite the office of the Deputy Commissioner of Kamrup or the Kachari Ghat in Guwahati. It was built by the Ahom King Gadadhar Singha (1681–1696), who was a devout Shaivite.

It is known as the smallest inhabited riverine island in the world. Country boats that are available on the bank of Brahmaputra take the visitors to the island. The mountain on which the temple has been built is known as Bhasmacala.

Shiva is said to have resided here in the form of Bhayananda. According to the Kalika Purana, at the beginning of the creation, Shiva sprinkled ashes (bhasma) at this place and imparted knowledge to Parvati (his consort). It is said that, when Shiva was in meditation on this hillock, Kamadeva interrupted his yoga and was therefore burnt to ashes by the fire of Shiva’s anger, and hence the hillock got the name Bhasmacala.

This mountain is also called Bhasmakuta. The Kalika Purana states that Urvasikunda is situated here and here resides the goddess Urvasi who brings Amrit (nectar) for the enjoyment of Kamakhya and hence the island got the name Urvasi Island. The presiding deity of the temple is Umananda (Tatrasti Bhagavan Sambhu- Ruma- Nandakarah Prabhu).

The temple of Umananda was built in 1694 A.D. by the Bar Phukan Garhganya Handique by the order of King Gadadhar Singha (1681–1696), one of the ablest and strongest rulers of the Ahom dynasty. The original temple was however immensely damaged by a devastating earthquake of 1897. Later, it was reconstructed by a rich local merchant who chose to inscribe the interior part of a Shiva temple with Vaisnavite slogans. 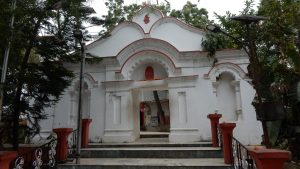 By Air: The nearest airport is Guwahati.

By Train: The nearest Railway station is Guwahati Station.

The Umananda Temple can be reached easily from Guwahati and North Guwahati by ferries. Ferries are available from the Fancy Bazaar ghat and the Sukleshwar ghats.