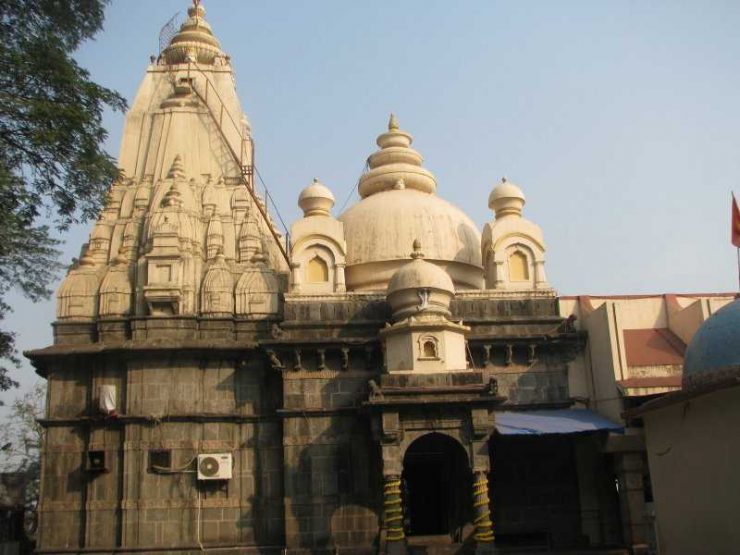 The primary deity of the temple, Vajreshwari , also known as Vajrábái and Vajrayogini, is considered an incarnation of the goddess Parvati or Aadi-Maya on earth. Her name literally means “the lady of the Vajra (thunderbolt)”.

The Shree Vajreshwari Yogini Devi Mandir is a Hindu temple dedicated to the goddess Vajreshwari, located in the town Vajreshwari, 75 km away from Mumbai. The town, earlier known as Vadvali, was renamed as Vajreshwari in honour of the presiding deity of the temple.

The original temple of Vajreshwari at Gunj was moved to Vadvali after its destruction by the Portuguese.

History goes, in 1739, Chimaji Appa had set up camp in the Vadvali region and was unable to take control of the Bassein fort. He prayed to goddess Vajreshwari that if he could defeat the Portuguese and capture the fort, he would build a temple dedicated to her. The goddess Vajreshwari appeared in his dream and gave him the solution. On 16 May, the fort fell and the Portugese were defeated. Thus, Chimaji Appa ordered the new Subhedar (governor), Shankar Keshav Phadke, to build the Vajreshwari temple.

Speaking about the structure, there is a Nagarkhana in the main entrance gate. The stone steps lead to the temple and there is a Dipamala (a tower of lights) in front of the temple. The main shrine has three sections: the main inner sanctum (Garbha gá¹›ha), another sanctum, and a pillared mandapa (assembly hall).

There is a mythological story behind the temple’s construction. A demon named Kali was troubling the humans in the Vadvali region and had waged a war against the gods. The sages decided to perform a yajna to please the Goddess. But they did not give any offering to Indra, which enraged him. He hurled his Vajra at the Yajna. The terrified sages pleaded the Goddess to save them. The Goddess appeared in all her glory and not only swallowed the Vajra and humbled Indra but also killed the demons.Since then, the goddess is believed to stay there itself. Thus, the Vajreshwari temple was established in this region.

Another story says that Indra and the gods prayed to Goddess Parvati to help them defeat the demon, Kali. Goddess Parvati assured them and helped them in the battle. The goddess defeated the demon. So, in her honour, the temple was built.

“Every man or woman who goes to the temple in a spirit of sincerity and faith leaves the house of the Lord a better man or woman” is rightly said by Gordon E. Hinckley and is applicable to this temple.