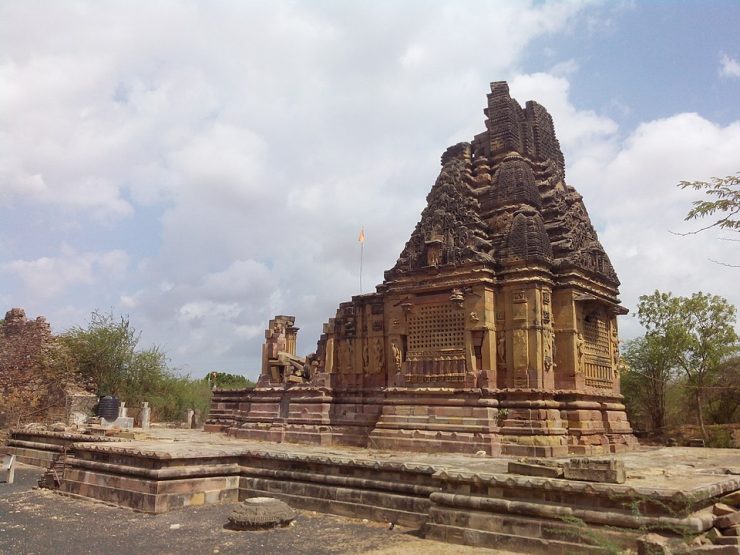 The Shiva temple, Kera, also known as Lakheshwara temple of Kerakot, is located in Kera village near Bhuj of Kutch district in Gujarat.

The history of this Shiv temple dates back to the era most of the temple portion was destroyed during the 1819 earthquake. However, the inner sanctum is still intact, along with the half of the main spire. Adjacent to the temple stands the Fort of Kapilkot which is also in a rundown state. The Shiva temple, located at Kera, is an ancient temple dedicated to Lord Shiva. The temple has been subjected to severe damages during the earthquake of 1819 and then during the earthquake of 2001. Still, the temple’s spire, inner sanctum and the images are still can be seen in an adorable condition. It is said that the Shiva temple was built by Lakho Phulani.

the temple collapsed during the 1819 Rann of Kutch earthquake. The shrine measures 8 feet 6 inches square inside, with walls 2 feet 7 inches thick, surrounded by a path 2 feet 6 inches wide, lighted by two open cut-stone windows. Of the hall, which was 18 feet 9 inches wide, only a part of the north wall with one window is left. The wall sculptures, though not numerous, are well executed, and on the faces of the spire is an elaborately cut ornament representing the outlines of a chaitya window, repeated over a triangular face, with human figurines in-between. Of these triangles of sculpture, there are eight on each side, gradually lessening as they rise higher one over the other.